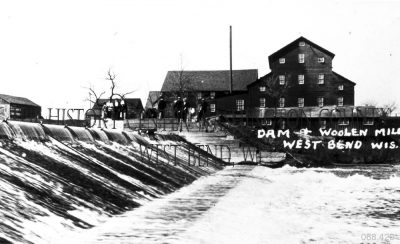 Feb. 2, 2018 – West Bend, WI – This Sunday is the 71st anniversary of the Woolen Mills fire in West Bend. In 1947 the headline on the front of the paper read: ‘Fire Early Tuesday Completely Destroys Plant of West Bend Woolen Mills; 85 Out of Job.’

Articles in the Research Center at the Washington County Historical Society, detail how the fire call on Feb. 4 went out at 1:05 a.m. High winds drowned out the sound of the first siren so a second was sounded. The delayed response along with drifting snow that blocked local roads meant “the plant was doomed before the arrival of the local fire department.”

Local authors Lee and Mary Krueger referenced the fire in their book, ‘The History of the Town of West Bend.’ “Firemen had to shovel the road to get the engine through. Then they had to scrape the snow off the river and chop a hole in the ice to get water. The mill loss was in excess of $300,000.”

Lyle Hader, 83, of West Bend also recalled the fire. “My father worked at the mill and was there the morning the fire broke out,” he said.

Harry Hader was 40 years old and working at the Woolen Mills. “My father couldn’t get home due to the snowstorm that evening so he decided to stay at work,” said Lyle. “I was 14 years old at the time and it was 27 degrees below zero and we had 40 mile-per-hour winds.”

During that era Woolen Mills made blankets for the military. Harry Hader fell asleep on a pallet of wool blankets when he awoke to a Springer Spaniel named Jiggers licking his hand. “The maintenance man at the shop, Harry Varnes, always brought his dog to work,” Lyle said. “He minded really well and my dad told him to be a good boy and go lay down.” Moments later Harry Hader awoke to a loud noise, got up, opened a door and found the old portion of the building engulfed in flames.”

Harry Hader jumped into his vehicle, drove up to the county shed and worked to convince the plow drivers of the emergency. “He had a tough time because my dad had raised a big beard that year and the guys were afraid to listen to him.” Lyle said, once the men figured his dad wasn’t crazy they saw the fire and jumped into action.

The cause of the fire was eventually thought to be spontaneous combustion in the old portion, the west end, of the building. “That area had 3-inch thick wood planks on the floor to support the heavy machinery at the mill,” Lyle said. “Those planks were so soaked with oil from years of those machines running and dripping oil – so once the fire got started it was almost impossible anyone could have stopped it because it burned like crazy.”

The building was lost and Jiggers also perished in the fire.