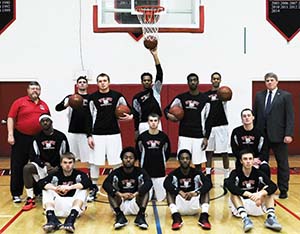 The Wildcats didn’t disappoint as it knocked down a 95-70 victory over UW-Sheboygan to advance to the final four of the Wisconsin Collegiate Conference state tournament next weekend at Wisconsin Dells.


The enthusiastic support from the Wildcats’ fans as well as from the players on the bench made the game genuinely feel like a home game for the Wildcats.

The Wildcats scored first and jumped out to an early lead before the Wombats eventually tied the score at 12-12.  That’s when the Wildcats shifted into to a higher gear and surged to a 45-29 lead at halftime.

Knowing full well that the Wombats would make adjustments at halftime and would come out with a renewed sense of urgency to start the second half, the Wildcats switched defenses to open the second half and went on a scoring spree of their own, soon extending the lead to over 30 points and removing all doubt about the outcome of the game.  UW-Sheboygan continued to battle hard and managed a few scoring runs, but the Wildcats generally answered enough at the other end of the floor to maintain the comfortable lead.

Shooting Forward Dre Johnson led the scoring with 25 points connecting on 6 of 10 2-pointers, 3 of 4 3-pointers, and 4 of 5 free throws.  Johnson also dished out 5 assists.

Shooting and Attack Guard Aaron Rathke had a double-double with 14 points and 10 rebounds hitting 4 of 6 from the floor and the same from the line.  He was 2-3 on 3-pointers as the Wildcats made 8 of 18 from distance as a team.

Power Forward Shaun Fischer (known affectionately as the “Big Oak” by his teammates) and Point-Guard Derrick Chaney each missed double-doubles by a mere one rebound.  Fischer scored 13 with 9 rebounds and 3 assists while Chaney scored 11 with 9 rebounds and added a pair of assists.

Perhaps the best Wildcats stat-line of the game came from Evan Rathke who is rapidly establishing the position of point-forward as a real position in basketball.  Evan dropped in 15 points to go along with 7 rebounds, 5 assists, 2 steals, and the Wildcats only blocked shot of the game, all while committing only one turnover.  As a team UW-Washington County racked up 20 assists with only 10 turnovers.

It was truly a remarkable performance by everyone on the team.  Defensively the players were moving quickly on air time of the passes and closing out on the catch.  Boxing out for rebounds was excellent and resulted in a remarkably high 50 boards for the Wildcats.  The energy level was tremendously high, too, as the players on the bench were so actively and positively communicating to their teammates on the court throughout the contest that it sometimes felt like the Wildcats had 12 players in the game at the same time.

The men will face UW-Marathon in the semi-finals at Just a Game Fieldhouse Saturday afternoon at 4 p.m.  The other semi-final game will be UW-Waukesha against UW-Richland Center at 2 p.m.

Going into the game with Sheboygan, the Wildcats had a game plan on the chalkboard of five goals and they succeeded decisively in all five.  Fact is, the Wildcats team executed their plans to near perfection throughout the game, hustling with a passion at both ends of the floor, controlling the rebounding and winning the battle of the “red zone”, advancing the ball up the floor quickly in transition to run the Wombats full court the entire game, then executing every play on their menu to challenge the Wombat defense, all while being very enthusiastic and supportive of each other, celebrating good plays together, but especially encouraging teammates if and when they made mistakes.

The most important game changing aspect of this game was clearly in team defense.  The Wildcats players worked especially hard to be in their best defensive position on every pass and dribble.  The team switched defenses several times between man to man and two different zones in order to slow the high powered Wombat offensive attack that had scored between 92 and 100 points in six of their last eight games, the exact span since the last time they played UW-Washington County in Sheboygan.

The Wombats conclude a very successful season of its own having entered this playoff game against UW-Washington County riding an impressive 10-game winning streak including a huge win over regular season eastern division champion UW-Waukesha in their final game of the regular season.

The win by the UW-WC Wildcats was the 20th time this season the men have left the gym with a victory, while leaving the gym six times with losses.

Next up the Wildcats face western division champion UW-Marathon, who defeated the Wildcats 81-72 in Wausau in the season opener on November 4.  But UW-Washington County is a much better team now than they were at the start when they began the season 0-2.  The Wildcats have continued to work hard and improve as individuals and as a team each and every day all season long.  They are still continuing in that mode, building their success through tremendous effort and focus in their efficient practice sessions that they share together, as well as bonding for outstanding team chemistry, and infectious positive attitudes consistent from one player to another.

These young men are a team in the truest sense of the word and they are totally dedicated to bring home the first ever Wisconsin Collegiate Conference tournament championship in the 48 years of their university’s history.  These guys are not just happy to be there at Final 4 – they have a much higher goal.  Even though the Wildcats played perhaps their best overall game of the season Saturday, they are fully dedicated to trying to play even better next weekend to bring the championship home to West Bend.

Those wishing to attend the game Saturday at Just a Game Filed House in Wisconsin Dells should not have difficulty getting tickets at the door since the facility was selected due to its higher capacity than most WCC universities.  The game Saturday is at 4pm with the championship game Sunday slated for noon.