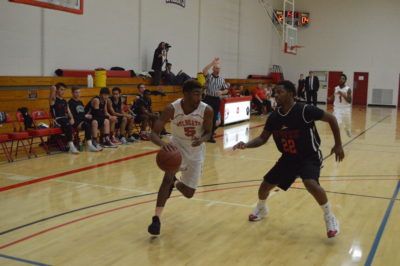 Dec. 7, 2017 – Washington Co., WI – The UW-Washington County men’s basketball team extended its winning streak to seven games to open the season with a 78-68 victory over UW-Fox Valley from Appleton.

The stats were fairly even for both teams except in the rebounding category which made the difference in the game as the Wildcats out-rebounded the Cyclones 48-22.

Continuing their trend for the season, the Wildcats had another new leading scorer in the game, Ahmad Pender, Jr. finished with 21 points and 10 rebounds.  AJ Barnes, Jr. had 15 points, 8 rebounds, and 4 steals.  Koy Walsh scored 12 and added 7 rebounds.  Adrian Huerta had 9 points, 7 rebounds, and 4 assists.

All 13 players suited up for the Wildcats played in the game, and 11 different Wildcats managed to put points on the scoreboard in the tremendous team effort.

Once again, the support and enthusiasm was electric among the teammates both in the game and on the bench.

You can see the exciting Wildcats in action Saturday, Dec. 9, in a 1:45 p.m. game as the Buccaneers from UW-Marinette travel to 400 S. University Drive in West Bend to take on the undefeated Wildcats.