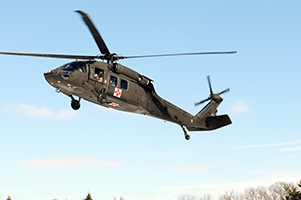 Feb. 1, 2017 – West Bend, WI – There will be a sendoff ceremony Thursday morning at the National Guard Armory on Chopper Drive as 35 Wisconsin Army National Guard Soldiers from West Bend will deploy to Afghanistan in support of Operation Freedom Sentinel.

Family and friends are expected to gather Thursday at 11:30 a.m. for a brief ceremony. Early word is Gov. Scott Walker or Lt. Gov. Rebecca Kleefisch are expected to be on hand.

There are also 65 Madison-based Soldiers who will provide UH-60M Black Hawk helicopter airlift assets and maintenance support personnel to their area of operations and specialize in moving troops and VIPs throughout the region.

Both units have trained extensively for their deployments and focused on specialized skills needed for aircraft maintenance, refueling, aerial gunnery, flight medic and hoist operations, and operating the UH-60 Black Hawk in various environments and conditions.

The Wisconsin National Guard continues to play a critical role as the primary combat reserve of the U.S. Army and Air Force in military operations around the globe despite troop drawdowns in Iraq and Afghanistan.

The Wisconsin National Guard simultaneously remains ready to execute its other primary mission as the first military responder in the homeland.