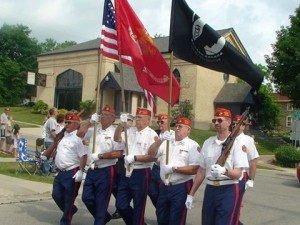 It’s with a heavy heart to relay the news of the death of Dave Wolf.

Wolf was a former owner of Dick’s Pizza in West Bend. He also owned the AmericInn in West Bend on Highway 33.

“Dave was always a behind-the-scenes kinda guy,” said Jeff Szukalski. “He never wanted to be in the limelight.”

Szukalski said Wolf was “was critical to saving the West Bend Christmas Parade and he made a donation right off the bat to fund the UW Alumni Band so it could appear in the parade for three years.”

Wolf was a longtime member of the West Bend Noon Rotary, active at Seafood Fest/ Riverfest, and he was an integral part of the annual West Bend Memorial Day Parade Committee.

Details on funeral arrangements for Dave Wolf will be posted shortly.

An article on Dick’s Pizza detailed the list of owners of the popular hometown restaurant. Wolf bought the business in March 1980 and ran it for 21 years.

Mike Paul We went there as a family in the mid 70’s and the waitress placed the butter scoop in front of my little brother. He looked at me and asked why he was the only one that got ice cream. I told him they only served it to the youngest family member so he may as well dig in and enjoy it. That’s when all hell broke loose.
Andrea Peterson Sure, they had pizza, but can we talk about the sundae bar with mint syrup?
Kari Kane Poorman’s Lobster (or as us kids called it, fish dunked in butter), the best thin crust, tabletop pacman, endless coloring pages and the 25 cent sundae bar! Sooo miss that place!
Kae Freeman Anderson They had the best lasagna and these little loaves of garlic bread. Also the little turn tables with all the dressings.