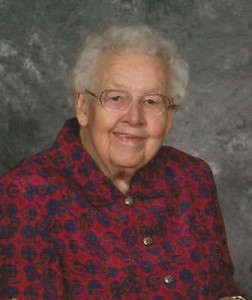 Ruth was born on May 7, 1922 in rural Slinger to Henry and Elsa (nee Schwanz) Nehm. She was united in marriage to her neighbor who was her brother’s best friend, Earl Schilling on October 11, 1947 at St. John’s E&R Church in Slinger.

Ruth held various jobs in Slinger until she married. After her marriage she worked side by side with her husband on the farm. Ruth was a member of Faith United Church of Christ in Slinger and was active in their Women’s Fellowship.  She enjoyed baking, cooking, gardening, tending to her orchard, and staying in touch with family and friends.

She is survived by her two daughters;  Nancy Schilling-Genz, James Genz of West Bend and Pearl (Donald) Casanova of Janesville, dear siblings;  Robert (Audrey) Nehm of Slinger and Laila (Garvin) Pickhard of Juneau, and her sister-in-law; Naome Pickhard of Lake Mills.  Ruth is further survived by nieces, nephews, other relatives and friends.

She was preceded in death by her parents, her beloved husband Earl, two sisters; Anita (Earl) Mechenich and Lenora Nehm;  and one brother Carl (Charleen) Nehm.

Funeral Services for Ruth will be held on Sunday, March 13, 2016 at 4:00 p.m. at Faith United Church of Christ (2895 Slinger Rd, Slinger, WI) with Pastor Sharon Stier officiating.  Family will greet relatives and friends at the church on Sunday from 1:00 p.m. until the 4:00 p.m. service.

Memorial contributions to Faith United Church of Christ, VCY America, or a charity of your choice are greatly appreciated.

Also a very special thank you to the caring staff at Wellington Place for their genuine and personal attention given to our mother.