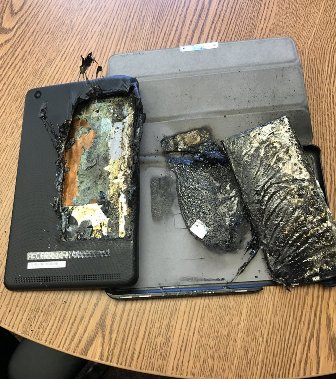 Chief O’Leary said there was no warning when the Acer E-reader began smoking and started on fire.

There was no damage other than to the device. Chief O’Leary said they contacted the manufacturer and alerted the Consumer Product Safety Commission. He said there was no particular recall for the device. He said sometimes devices malfunction through no fault of the consumer. The device was manufactured in 2014.

He noted a woman on an International flight was burned about the face last month when the battery operated headphones she was listening to exploded.

Chief O’Leary said they wanted to alert the public to the incident.