May 28, 2021 – Washington Co., WI – On May 19, 2021 the Washington County Sheriff’s Department was contacted by the Menomonee Falls Police Department about a death investigation they were conducting after responding to an apartment in the village to check the welfare of a subject. 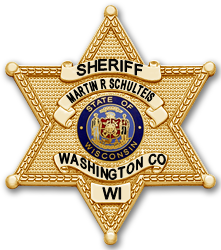 The police department was contacted on Wednesday, May 19, 2021 at 11:20 a.m. by a concerned family member. The police department made entry and located an adult female and adult male deceased of apparent gunshot wounds. Initial information provided by the Menomonee Falls Police Department indicated they were actively investigating the case, but not seeking any additional suspect(s) and there was no pending danger to the public.

The Washington County Sheriff’s Department has officially been notified the physical evidence revealed the male, who was the sole renter of the apartment, died of an apparent self-inflicted gunshot wound after taking the life of the female who was known to him.

He was appointed to that position on April 24, 2017, and was assigned to the night shift. Corrections officers do not use firearms as part of their employment. Before coming to our agency, he served in the Marine Corps from 2007 to 2012 and was honorably discharged.

At the conclusion of the criminal investigation by the Menomonee Falls Police Department, this agency will also conduct our own internal investigation to determine if there were opportunities to intercede in this tragedy.

All of the staff at the Washington County Sheriff’s Office are given a copy of my “Leadership Direction” that stresses the importance of building trust within the community we serve. Phillip J. Marker betrayed this direction and this community in the most horrific way possible.

On behalf of everyone at the Washington County Sheriff’s Office, I would like to extend our sympathy to the victim’s family and friends. We ask that you join us in giving your thoughts and prayers to all of those affected by this tragedy. This senseless and brutal act of violence ended two lives far too early and brings sorrow to us all.

The Menomonee Falls Police Department is the lead criminal investigative agency and any inquiries about the incident should be directed to them.