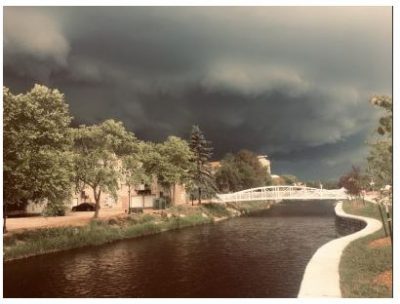 The concept plan for the west bank Downtown Riverwalk was unveiled last month. Improvements include areas for the public to sit and relax along the river, an accessible fishing deck, a kayak launch, and a new bike/pedestrian path under the Washington Street bridge that will link the Riverwalk trail in downtown West Bend to the existing trail north of Washington Street.

“The City of West Bend is grateful to the Fund for Lake Michigan for this design award. Our community, prides itself on both quality of life and a strong downtown business district, so there is widespread support and anticipation for the west bank reconstruction,” said West Bend Mayor Sadownikow.

As part of the design, the engineering firm Short Elliott Hendrickson (SEH) Inc. is investigating ways to address water quality issues posed by stormwater runoff from nearby streets, roofs, and parking lots that flows directly into the Milwaukee River.

The design will include green infrastructure to capture and treat runoff in the immediate area of the Riverwalk area. SEH is also exploring the possibility of incorporating stormwater treatment for runoff that flows into the project area from outside of the Riverwalk.

The Fund for Lake Michigan has generously awarded a $100,000 grant to the city to help pay for project design and engineering.

Fund for Lake Michigan Executive Director Vicki Elkin said, “The West Bend project is an opportunity to achieve long-term measurable improvements in water quality while supporting the City’s recreational and economic goals. We are excited to fund it and to see more and more municipalities address their development needs in a way that promotes a sustainable Lake Michigan.”