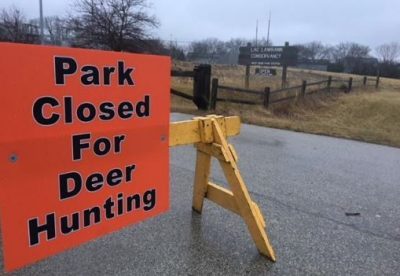 Jan. 24, 2018 – West Bend, WI – There was quite a bit of data, analysis, reflection and suggestions during Tuesday’s post Deer Management follow-up meeting as hunters and committee members gathered to explore how to move forward with managing a growing deer population within the West Bend city limits.

Final numbers included hunters seeing dozens of deer in the area of Lac Lawrann Conservancy, three deer were killed in a span of five days and that included an adult doe, yearling doe and yearling buck.

The discussion on how the program was carried out was well analyzed:

-there was an overall feeling that things could have gone better if it wasn’t such a tight timeline to get everything going in a 3-week timeframe right around the holiday.

-Parks and Forestry Superintendent Mike Jentsch recommended there should not be any restrictions to hunt near the trails. Since the park is closed it would “give hunters more opportunities and less restrictions.”

-Safety was a big concern. Police were notified that even though the park was clearly marked ‘closed’ a runner went through Lac Lawrann Conservancy while hunters were in the woods.

-West Bend police Lt. Duane Ferrand had reservations about shooting horizontally. The hunters were required to shoot from a tree stand. It was determined the council would have to approve a new ordinance to shoot from a blind or a ridge.

-There was overall agreement that many in the community did not understand bow hunting and those who were selected for the program said “just because we’re hunting in a park, that doesn’t mean it’s easy.”

-The hunters were sure the deer realized they were there. The conclusion = deer are smart.

-Jennifer Wiedmeyer of West Bend spoke as someone who lived in the community 31 years and didn’t feel hunting deer in a city park was the right thing to do.

-Wiedmeyer felt the problem with the deer was because West Bend is growing and the city is invading the natural habitat of the deer.

-Wiedmeyer though more signs should be put up around the community warning people about deer crossings.  “This makes me frustrated that it’s come to this in West Bend. I just think it’s sad. I wish city would spend money on signs and make people more aware about how prevalent the deer population is here. I don’t have a problem with deer being hunted, it just shouldn’t happen within our city limits.”

-Butschlick told the story about how he’s seen a big change in his neighborhood over the years with the increasing number of deer. “I’ve stopped feeding the birds because of the deer and within the last five or six years the deer have been a menace. I have a garden with a 12-foot net and that’s the only thing that’s been able to keep them out. The deer are starting to get to a point where every year a doe will have two more.”

-Bringing in sharpshooters was discussed as a way to improve success but there were strong concerns about safety and, of course, justifying the expense.

-Restrictions on the qualifications to hunt, whether five days was an adequate timeframe and if the program should be run during months like September and October were also discussed

-Jentsch questioned what an expected harvest per year should be. Many in attendance thought even if 20 deer per park per year were harvested, that would still take a long time to get the situation under control.

The final consensus was this was one season and one hunt and the committee would recommend to the Common Council to try another hunt and implement some suggested changes and then let the council decide what is best.

Target dates for another Deer Management Program were January 2 – 6, 2019.