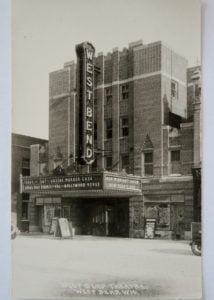 The West Bend Theatre opened in 1929 and stopped showing movies in 2006.