August 6, 2018 – Kewaskum, WI – One of the most popular car shows in Washington County may be in jeopardy.

Mark ‘Kurly’ Kissinger posted a note on social media over the weekend that he was cancelling this year’s Kewaskum Classic Car Show. 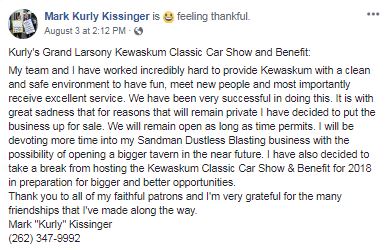 In 2015 ‘Kissey’ announced he was stepping down from the event.

The show, a popular stop for the car clubs, normally drew about 400 classic cars to Main Street in Kewaskum.

Over the years Kissey used the car show as a way raise money to benefit local people in need.

In 2016 Mark ‘Kurly’ Kissinger of Jackson said he would be taking over.  “My father and I ran a car show in Slinger for a number of years,” said Kissinger.  “I’ve gone to Kissey’s show and I don’t plan on changing anything.”

This would have been the 18th annual show.

Early word is Kissey is looking to step back in. A liquor license and permits to close the street are still needed however time is waning as the show is normally the third Sunday in September; this year it would be Sept. 16.

The Kewaskum Fire Department normally serves beer at the event and already holds a permit.