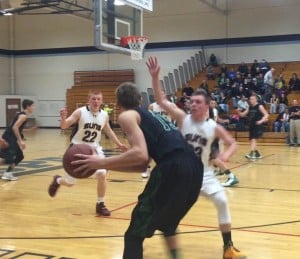 The Kettle Moraine Lutheran Chargers defeat the West Bend East Suns 53-44 in a non-conference varsity basketball match up Thursday at the Acuity Fieldhouse in West Bend.

The Suns dominated the first half capitalizing on a number of turnovers by the Chargers which fueled East’s transition offense.

The Suns led at the half, 21-14 as KML struggled to find its rhythm; the Chargers made only one of their first five shots. 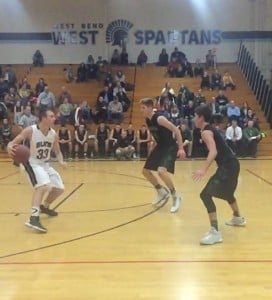 The second half was a different story for both teams. KML turned the ball over less and began to make more of their shots. East, although still playing well, struggled against a tough Charger full-court press and slowly lost the lead.

KML’s Mack Kueneppel and Connor Johnson’s scored to grow the Charger lead and seal the win, 53-44.

The Chargers return home Friday, Jan. 8 to face off against the Kewaskum Indians.

East also plays Friday on the road against Watertown.