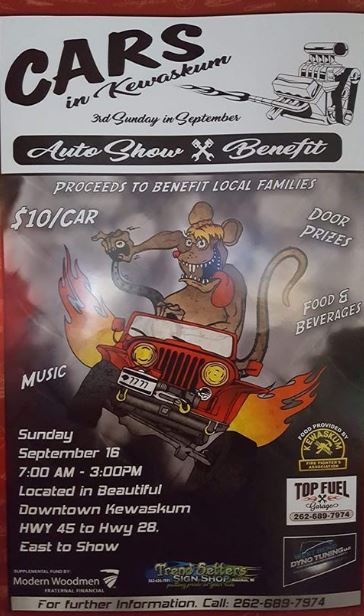 August 20, 2018 – Kewaskum, WI – Good news for classic car show lovers in Kewaskum as the annual September show is back on.

Two weeks ago WashingtonCountyInsider.com ran a story about the Grand Larsony Custom Classic Car Show possibly being in jeopardy.

A permit for the event had been issued to Mark ‘Kurly’ Kissinger but according to posts on social media there was some thought it may not move forward.

The Village Board revisited the issue during its Monday meeting.

Mark Kissinger was in attendance.

Village President Kevin Scheunemann said Mr. Kissinger addressed the board for about five minutes and then left.

“I wanted to hear it from Mark Kissinger himself whether it was true he was going to hold the car show or not because on social media there was reports he wasn’t,” said Scheunemann.  “After five minutes he said he wasn’t going to hold the show, he walked out and the board promptly pulled his permit.”

Trustee Dave Spenner commented that Scheunemann handled the situation appropriately and the board voted 7-0 to revoke the permit.

“The board thought, if you’re not going to hold the show then you don’t need the permit and so it was revoked,” said Scheunemann.

The keys for the event and the permit were then awarded to Mike Beal from Top Fuel in Kewaskum. The car show will go on as planned Sept. 16 on Main Street in Kewaskum.

“We’re changing the name of the show to Cars in Kewaskum,” said Beal. “I’m taking this over out of respect for Richard ‘Kissey’ Kissinger who started the show in 2000. I was honored that he came to me and asked me to continue his legacy.”

Beal said he will also be in charge of the show in 2019. “This is a community event,” said Beal. “The community came together and they wanted it to continue.”

In 2015 ‘Kissey’ announced he was stepping down from the event.

The show, a popular stop for the car clubs, normally drew about 400 classic cars to Main Street in Kewaskum.

Over the years Kissey used the car show as a way raise money to benefit local people in need.

Stay tuned as more details on the show will be released in the coming weeks.