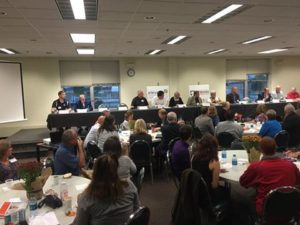 Officials shared their views about the Heroin epidemic in Washington County, the success of drug court, funding for prevention and treatment and expanded access to services for people receiving Medicaid.

Some of the comments from lawmakers in attendance are posted below and there’s a video of Lou Herrnann talking about her 39 years of sobriety.

-Supervisor Mike Miller – “Talk to your kids about drugs because somebody on the other side of the fence is telling them just the opposite and scare them because this is a scary thing to have a drug problem in your home.”

-Senator Duey Stroebel – “I like more parental engagement, or engagement of teachers or personal responsibility for family involvement and more traditional values; these are more and more of the reasons why we’re seeing the drug issues out there.”

-Mayor Kraig Sadownikow – “I had a chance this summer to get involved with STAND, Students Taking Action Not Drugs, and that’s a brave group of kids. It’s not cool to be in STAND, I imagine. It’s not cool to be the class looked at in class to tell the teacher someone next to them is doing drugs. But let’s support the kids who are looking to help others.”

-Rep. Jesse Kremer – “Talking to my law enforcement agencies, I have a lot of EMS colleagues, and this (marijuana) is not necessarily a gateway drug. I kinda disagree with some folks on that. Talking with law enforcement the gateway drug is definitely opioids and prescription meds. But I agree with Sen. Stroebel I would not vote to legalize marijuana, it would be a terrible burden for our state and our families.”

-Rep. Bob Gannon – “I’ve met in prisons and I’ve looked at the programs we use to prepare people for freedom and there are times we do a woefully poor job at preparing those we’ve sentenced to get back into society.”

-A majority of lawmakers in attendance were against legalizing marijuana in the state of Wisconsin. “I don’t know any employer that says ‘I hope my staff shows up high today,” said Sadownikow.

-Supervisor Mike Miller – “States that have legalized marijuana are using it as a revenue maker because now they can tax the sale of this stuff but they don’t realize the consequences. I firmly believe marijuana is definitely a starter drug.”

-Rep. Bob Gannon – “I’m a tough love guy and if you come out and you’re absolutely bound and determined to get yourself back in prison I say that parole officer walks right into the courtroom and we ship them right back and we use those resources for someone who wants to get right.”

-The Legislative Breakfast has been held annually since 2012.

-In closing out the 2-hour discussion Moderator Dolores Bomrad said Rep. Dan Knodl asked that they end on a positive note. That’s when Lou Herrnann, 75, of Cedarburg stood up in the back of the room and said, “On Nov. 19 I will celebrate my 39th year of sobriety.” She then went on to stress the significance of programs to help those struggling with dependency.  Her comments are posted in the video below.