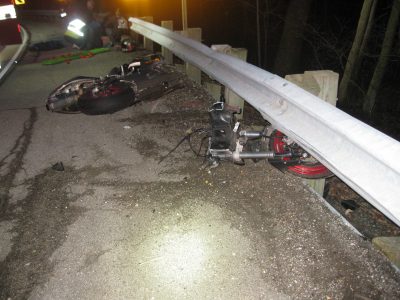 The operator, a 27-year-old Wauwatosa man, was eastbound on STH 167 when he lost control of his motorcycle and slid into the guard rail.

The force of the collision snapped the front forks off of the frame.

The driver, who was wearing a variety of protective gear, was transported to a local hospital with injuries to his right arm, left shoulder and a possible concussion. The cause of the crash remains under investigation.

The Washington County Sheriff’s Office is investigating three thefts from unlocked vehicles that occurred over the weekend in a residential area northeast of Silver Lake in the Town of West Bend.

The incidents occurred on Silver Lake Dr. and Overlook Circle and the thefts likely occurred during the evening hours of Saturday, April 15 or morning hours of Sunday, April 16.  Items taken included money and alcohol.

Neighbors are encouraged to contact the Washington County Sheriff’s Office if you have any information relating to the most recent thefts, or see any further suspicious activity.