Home  »  Uncategorized   »   Neighbors will miss a familiar face at this year’s Germanfest as Lillian Oelhafen has died. Oelhafen celebrated her 100th birthday on Dec. 24, 2016. 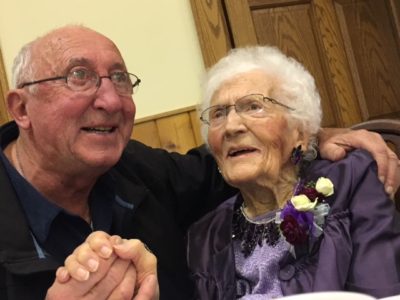 March. 3, 2017 – Kohlsville, WI – It’s with a heavy heart to report the passing of Lillian Oelhafen who died at her home today in Kohlsville at the age of 100.

This past November more than 400 friends and family turned out to help Lillian celebrate her century birthday. Although she officially turned 100 on Dec. 24, Lillian said she simply wanted to see all the people who touched her life.

“She was a fixture at Germanfest,” said Todd Tennies. “She got to see all her old friends. People enjoyed walking up and talking to her because she was so friendly.”

Lillian Oelhafen was born Dec. 24, 1916 when Woodrow Wilson was President of the United States, Charlie Chaplain dominated films, and the Saturday Evening Post first featured a painting by Norman Rockwell on the cover. 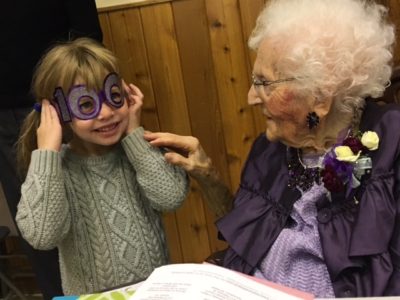 Oelhafen was a small woman with an easy smile.  She has spent the past years writing her memoirs and was often a frequent resource to help document the history of Washington County.

During the Washington County Fair, Oelhafen recalled attending the fair as a child in the 1920s. She remembered growing up in Kohlsville and how she would go to the fair with her family.

“It was very dusty,” said Oelhafen. “There was always a dark man with a good suit on and he was standing where you entered the fair and he had a whisk broom and he would offer to brush the men’s suits because it was so dusty.”

Oelhafen said it was normal for families to go to the fair together. “They had rides like a Ferris wheel and merry go round,” she said. “And kids would show their animals.”

Oelhafen explained how she was 10 miles from West Bend and if kids showed their animals they would walk them to the fair. “They didn’t get trucked, they walked,” she said.

In September 2015 Oelhafen took part in her 80th high school reunion. She was one of two students left from the Class of 1935. 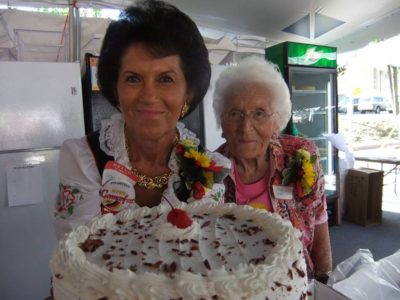 Judy Etta with her mother Lillian Oelhafen at Germanfest

Notes from an interview with Lillian in 2016

Generation of change and technology

Lillian had lived through some of the greatest change in the century. “I’ve got an iPad,” said Lillian. “I’m writing a cookbook.”

Lillian is also writing her memoirs which include the story about the ice house and the mill.

Lillian grew up in Kohlsville across from what is now Jug’s Hitching Post. “My great grandparents, Ferdinand and Wilhelmina Sell, emigrated from Germany and came to America on their honeymoon in the 1800s,” said Lillian.

The couple set up their homestead in the Kohlsville area because it reminded them of their home in Germany. Ferdinand bought the local saw mill in 1893. There was also a grist mill by the lower pond and during winter they’d harvest ice.

“The ice could not have snow in it, it had to be clear ice,” she said. “They would have a big cross-cut saw, it took two men to handle it and they would saw blocks of ice 12 -15 inches square.”

Lillian remembered the ice was stored in a shed, where the Hitching Post parking lot is now. “They had a lot of saw dust from the mill and the ice was preserved in the sawdust,” she said. “They would have a layer of ice and a layer of saw dust and it was amazing how that ice stayed preserved.”

Otto Moritz married the Sell’s daughter and helped run the mill, which eventually became known as the Sell and Moritz Mill.

Lillian said her great grandparents lived in a home that had 16 rooms because “if they employed men they had to give them lodging.” She said the home still exists today, across the road from the Hitching Post.

“After the men cut the ice, they’d load the blocks on a big bobsled,” said Lillian. “Big strong draft horses would pull the sled to the ice shed.”

Lillian said the process was a dangerous business. “Farmers Frank and Ernest Rusch, they were bachelors, they had a good strong team of draft horses,” she said. “They came with their bobsled and load it up to haul ice to the shed and one day they broke through the ice and the horses drowned. It was just horrible.”

“We were working at the Ziegler Company and every afternoon we’d have somebody go over to R.W. Boldt Drug Store,” said Lillian. “We’d order a phosphate or soda and one person would go and they’d take the order and get it filled and bring it back to the office for a snack. I usually got a phosphate or raspberry sundae.”

Details on funeral services for Lillian Oelhafen will be posted shortly.