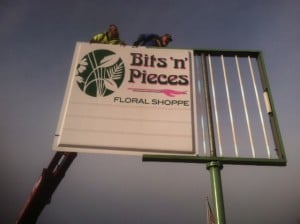 Crews waited until the winds died down on Friday to install a new sign at Bits ‘n’ Pieces. The shop on the triangle corner of S. Main Street has been in business 43 years.

In May 2012 I wrote about the 40th anniversary of the store. That article is below.

This month, (May 2012) Bits ‘n’ Pieces in West Bend is celebrating its 40th anniversary.

“We’ve always had a minor distraction in May,” said Pat Bohn mentioning another big celebration known as Mother’s Day. 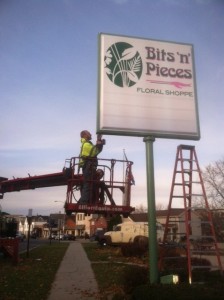 Bits ‘n’ Pieces opened in May 1972 in the basement of Chapman’s Meat Market in Barton, on the corner of N. Main and School Place. The Bohn brothers worked the shop as a side business carrying crafts, a couple plants and some terrariums.

Over time the plants got bigger, hanging baskets were brought into the mix and the brother’s started looking for a bigger location finally settling in 1976 on the south end of town in the Westfair Mall.

“I can’t believe we went from the basement of a meat market in Barton, USA to the mall,” said Pat Bohn.

At the Mall with Prescott’s Super Value, Bits ‘n’ Pieces was located across from Rose Maries Hair Design and West Bend Savings and Loan, next door was Monarch Studio, Wooden Nickel and Allen Hron.

It was there where Bits ‘n’ Pieces installed its first water wheel, Pat’s sister Mary Bilgo jumped into the business, and a black mynah bird named George found a home.

“He would whistle at the customers; we got him from Walden’s Supper Club,” remembered Deb Bohn. “We did wedding flowers for them and the state came and told the owners they couldn’t have a bird in the restaurant and they asked if we’d take him and we said sure.”

When Bits ‘n’ Pieces outgrew the mall the Bohn’s took advantage of a generous offer from Richard Larson Sr. to move into their own building, their current location.

In 1988, there were three other buildings on that triangle corner off Kilbourn Ave. and Main St. The southern-most building was the Klinka Olds Agency, later Schwartzburg Olds. That building was remodeled and turned into the flower store.

There was also a small residence occupied by a member of the Weinert family and on the triangle point was the Reisse Paint Store and living quarters; a building originally built by the Fink brothers after the Civil War in the late 1870s.

Those buildings were torn down and a greenhouse was added.
Over the years the Bohn’s and Bits ‘n’ Pieces churned through the seasons and the cycles of life. Their arrangements were ever present at family gatherings and funerals including godfathers of the community like Tom Rolfs, Leander Schmidt, and the father of NASCAR’s Robbie Reiser.

Family was as constant as flowers at Bits ‘n’ Pieces, the small corner shop gained a reputation for budding employees who blossomed into their own businesses including Charlene Jung at Design Originals in Hartford, Anne Dietenberger at Elegance in Bloom Floral in Germantown and The Flowersmith.

“The only thing I was ever good at was art and it’s funny how that was my talent and I just kind of fell into this floral thing,” he said.

Michael Cardarelle I remember helping Pat and Terry remove barn boards and putting them up below the meat market for paneling,the shop there was real nice,also.
Like · Reply · Message · Yesterday at 1:27pm