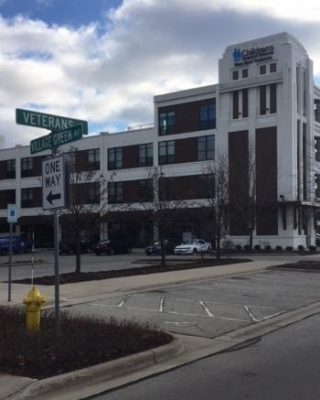 Dec. 5, 2017 – West Bend, WI – The new sign for Children’s Hospital of Wisconsin/West Bend Pediatrics is now in place on the tower at the former West Bend Aluminum Company building on Veterans Avenue.

It was October when the Plan Commission met to review the a sign.

Mayor Kraig Sadownikow said, “I think it does give the appearance this is a hospital.” 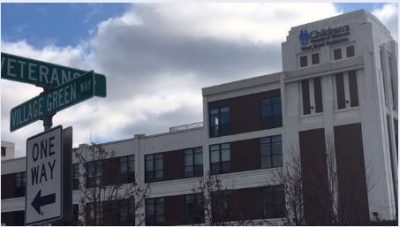 The sign will be up above second floor. The clinic is on the first floor, currently undergoing a build out on the northeast corner.

The sign is on the stair tower which is a full floor higher than the rest of the building.

Children’s Hospital of Wisconsin spokeswoman Maureen Goetz said the sign will help with direction and visibility. “Families come with a level of stress and anxiety and we want them to find us,” she said.

Originally the sign was proposed at a lower height but because of light emission the request was made to put it higher to reduce conflict with any adjacent residential window.

Commission member Bernie Newman asked it Children’s Hospital would also have signage at the entrance to the buildings on Highway 33 and N. Main Street. Goetz confirmed they would.

“This brings life to the side of the building,” said commission member Chris Schmidt. “The signage is good when done tastefully.”

The clinic is relocating from its site on W. Washington Street and Shepherds Drive to the Cast Iron building.

What do you think?  Will the sign on the tower make the building look like a hospital?