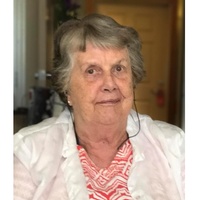 Alice was born to the late Joseph and Grace (Williamson) Johnson in Galesville, Wisconsin, on the coldest day that winter according to her father.

Alice graduated from Galesville High School in 1945. After high school she worked in Galesville and LaCrosse, WI.

Alice married Allyn Murray on May 14, 1947. They moved to West Bend in 1953 where she took care of their home and raised their five children. After her children were grown, Alice worked at Silverbrook Middle School in Food Service.

Alice was a member of Holy Angels Mission Circle and enjoyed painting, knitting and crocheting.

Alice was preceded in death by her infant son David, her husband of 67 years Allyn Murray, her parents Joseph and Grace Johnson and her brother Donald Johnson.

A Mass of Christian Burial will be held at Holy Angels Catholic Church in West Bend, WI at 11:00 AM on Friday August 18 with visitation beginning at the church at 10:00 AM.

In lieu of flowers the family suggests contributions to Holy Angels Congregation or to the Alzheimer’s Foundation.