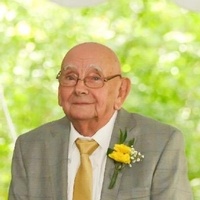 Al worked with his father at Stockhausen Garage in Newburg from a young age until 1966. He then went to work for Simplicity Mfg. in Port Washington and retired as a maintenance lead in 1996. He enjoyed his retirement traveling with Barbara and spending time with friends and family. Also, he enjoyed fishing, hunting and touring the countryside on his motorcycle.

As a father Al taught and lead by Christian values. He was honest, hardworking, kind and a very gentle soul that prided himself in service of friends and family. He was a lifetime member of Holy Trinity Catholic Church in Newburg, past member of the Newburg Fire Department and the Newburg Sportsman’s Club.

He is preceded in death by his wife Barbara, parents Aloys and Marion Stockhausen, 3 brothers-in-law: William Bohn, James Haumschild and Howard Brunner, his in-laws: Roman and Marie Bohn and his step-mother-in-law Clara Bohn.