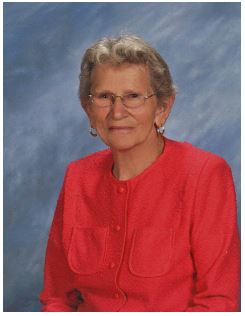 Clara was born on May 23, 1920, the daughter of the late John and Regina (Montag) Metz. On August 10, 1968, Clara was united in marriage to Arnold Weiss at Holy Trinity Catholic Church in Kewaskum. Arnold preceded Clara in death on August 3, 1976.

Clara was born and always lived on the 60-acre farm that her parents bought when they got married in May of 1917. She was employed in Human Resources at Amity Leather Products in West Bend, retiring in 1975, after 35 years of service. Clara was a lifetime member of Holy Trinity Catholic Church in Kewaskum where she was baptized, confirmed and attended school. She served on the church council, various committees and was a member of Christian Women. Clara was a lifetime member of St. Anthony’s Guild, Society of the Little Flower and Central Association of the Miraculous Medal.

A Mass of Christian Burial for Clara will be held at 1:00 p.m. on Wednesday, January 31, 2018, at Holy Trinity Catholic Church, 331 Main Street, in Kewaskum with Father Edwin Kornath officiating. Burial will follow in the parish cemetery.

Clara’s family will greet relatives and friends at the church on Wednesday from 11:30 a.m. until the time of Mass.

The Myrhum Patten Miller & Kietzer Funeral Homes have been entrusted with Clara’s arrangements.

Clara wanted to thank everyone who has touched her life and let them know how much she appreciated and loved them.