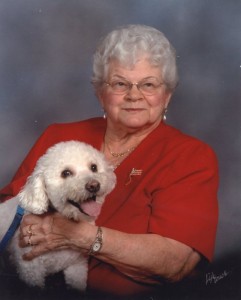 She was born on September 20, 1923 in Milwaukee to the late Arthur and Eleanora (nee Quaas) Moths.  She attended Fillmore State Grade School and graduated from West Bend High School in 1941.  As a young woman, Doris was employed at Enger-Kress and later worked at the Holiday Inn and the West Bend Company.

Doris married Merlin Prost on May 24, 1947 at St. Martin’s United Church of Christ in Fillmore.  Doris farmed with her husband on the Prost homestead and continued living there for 56 years until moving to West Bend.

Doris was a former member of St. Martin’s United Church of Christ and Immanuel United Church of Christ and was a current member of First Baptist Church.  She was also a member of the Country Cousins Homemakers Club, the Women of the Moose Chapter # 732, St. Mary’s Young at Heart Club, and entertained with the Sweet Sixties Quartet for many years.  Doris enjoyed gardening, growing flowers, and traveling to visit her children in various states.

In addition to her parents and her husband, Doris was preceded in death by her daughter, Diane Egerer; her brother, Vernon Moths; her sister-in-law, Doris Prost; and four brothers-in-law, Donald Weis, Paul Roos, Harvey DeMunck, and Harold Prost.

Funeral Services in remembrance of Doris will be held on Thursday, January 28th at 6:00 pm at the Myrhum-Patten Funeral Home (1315 W. Washington St. West Bend).  Burial will be in Washington County Memorial Park.

The family will greet relatives and friends at the funeral home on Thursday from 4:00 pm until the time of service at 6:00 pm.

Memorials to the building fund of First Baptist Church or to the charity of your choice would be greatly appreciated.

Myrhum Patten Miller & Kietzer Funeral Homes have been entrusted with Doris’s arrangements.  Additional information and guest book may be found at www.myrhum-patten.com.