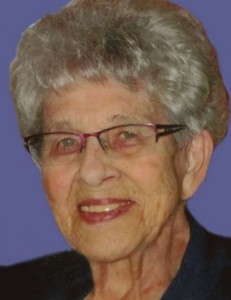 She was born on September 6, 1928 to the late Alfred Sr. and Hertha (nee Westphal) Horst in Hartford, WI. She graduated as Valedictorian of her class from Hartford high school in 1946. She worked as a legal secretary for the Washington County District Attorney’s office. On July 25, 1950 she was united in marriage to Willard Kaun at the Little Brown Church in the Vale, Nashua, Iowa. She was baptized/confirmed at Peace Lutheran Church, Harford WI and a member of St. John’s Lutheran Church in West Bend. Her life revolved around family, dear friends and neighbors, always ready to help out, including painting and wall papering projects. She developed many new friends while working as a waitress in the late 60s and 70s at the Golden Knight. She enjoyed antiques, playing cards with the “torte” ladies and goofing around. She found satisfaction in giving her all and making it fun, always taking time to care for her family and grandchildren. She will be missed by all who knew her.

In addition to her parents, she is preceded in death by her brother, Alfred Horst Jr.; four sisters, Jeanette (Vincent) Hausmann, Florence (Elroy) Beilke, Laverne Horst, and Delores (George) Kraeuche; two brothers-in-law, Floyd Luedtke and Jim Grady and one nephew.

Elaine’s family will greet relatives and friends Monday March 28 at the church from 2:30 p.m. until the time of service.

A special thank you to the doctors, nurses, and staff at Froedtert Hospital for all their help and care.

Memorials to St. John’s Lutheran Church are appreciated by the family.