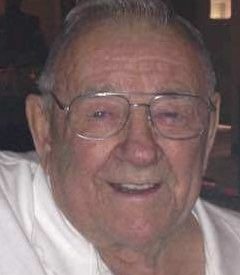 Ken was united in marriage on September 25, 1944 to Luella Tatro. Ken owned his own milk route for Kraft Foods in Antigo and got the nickname “Tin Can Kenny.”

Eventually relocating to Hartford for Kraft Foods as a field supervisor. He then worked at Stolper Steel in Menomonee Falls for over 14 years. Ken started Goeman’s Wood Products, Goeman Trucking and Ener-Con with his sons and family and was still involved with Ener-Con.

Ken enjoyed coin collecting, hunting, gardening and playing cribbage. He spent time up North at the “shack” with family and friends. Ken was a charter member of the Allenton Lions Club.

Continued visitation at the Church on Thursday from 9 AM until time of the service. In lieu of flowers, memorials to Divine Savior Lutheran Church are appreciated.

The family would like to thank Dr. Weber for his care for many years and the staff at Cedar Community, Aurora Medical and the Cancer Care Center for their care and support.