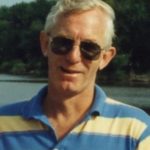 Ronald “Whitey” W. Wagner, 73, of West Bend, passed away peacefully following a long and courageous battle with cancer on Monday, September 19, 2016 at his home with his loving wife and family by his side.

He was born on November 6, 1942 to the late Helen Wagner (nee Kugler) in West Bend. He graduated from West Bend High School. He was drafted and honorable served in the United States Army for 2 years. On leave following basic training he was united in marriage on August 2, 1966 to Susan Berres at St. Michael Catholic Church. Ron worked for the West Bend Company for 45 years. He enjoyed wood working, painting, and handyman work on his son’s apartments. He liked to refinish furniture and was always working around the house. He was a member of Holy Angels Catholic Church of West Bend, a 25 year club member and usher. He will be missed by all who knew him.

The family will greet relatives and friends at the funeral home Sunday from 4:00 p.m. until the time of service.

A special thank you to Father Heppe, the Horizon Home Care doctors, nurses and staff for all their compassion and care,  the Froedtert medical team, Neighbors, relatives, and friends that came by in the last days of Ron’s life for all their support.