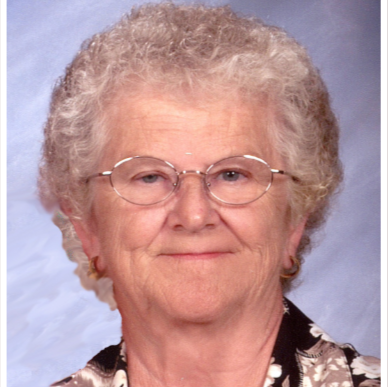 She was born on October 19, 1935 to the late Peter and Loretta (nee Deringer) Straub in Elmore, WI. On September 10, 1960, she was united in marriage to Paul O. Bodden at St. Matthew’s Catholic Church, Campbellsport, WI. In Bernie’s earlier years she enjoyed winter days when the whole family would take snowmobiling trips after church to Barney’s bar in Wayne. She was well known for her baking and cooking, especially holiday baking with the grandchildren. Other interests she enjoyed were taking bus trips, working on word search books, putting together puzzles and playing cards and bingo. Bernie’s favorite animal was chickens; she had a lot of chicken décor and enjoyed raising them.

The family will greet relatives and friends at the church on Friday from 11 a.m. until the time of Mass.

The family would like to thank the staff at Kettle Moraine Gardens for all their help and care.

The Myrhum Patten Miller & Kietzer Funeral Homes have been entrusted with Bernie’s arrangements.