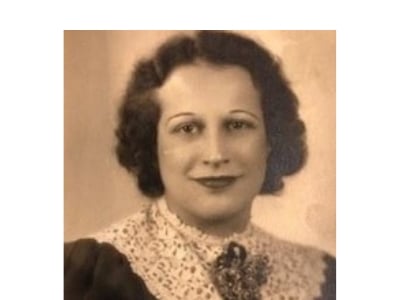 Frances was born on January 13, 1916 in Chilton to the late Elroy and Selina (nee Scanlan) Broker.

As a child, her family moved to Milwaukee where she attended local schools, graduating from Washington High School.

Throughout her life, she worked at various retail stores in the Milwaukee area.  At the time of her retirement in the early 1980’s, she worked as an administrative assistant at the former Milwaukee County General Hospital.

Over the years, she loved to travel.  She visited many worldly places, including Germany, Switzerland, Norway, Great Britain and Canada to name a few.  She also enjoyed traveling around the United States, listening to music, playing the piano, and dancing.

In addition to her parents and husband, she was preceded in death by 1 daughter Jackie Nienke, 2 sons-in-law Bill Nienke and Paul Laumann,  1 grandson Will Nienke and 1 brother Earl Broker.

Funeral services will be held on Saturday, March 16 at 11 a.m. at the Schmidt Funeral Home in West Bend.  Burial will follow in St. Patrick’s Cemetery in Adell.  Visitation will be Saturday from 10 until 10:45 a.m.

Frances’ family would like to extend a sincere thank you to the staff at The Cottages for the wonderful care, support and friendship.