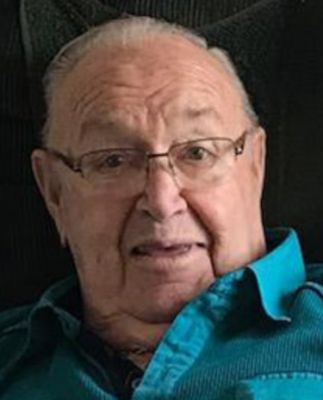 He was born on January 14, 1932 to the late Claude and Mary (nee Bohan) Ferguson in Byron, WI. Fergie grew up and spent most of his life in the Town of Byron farming. He graduated from Lomira High School. On June 19, 1954 he was united in marriage to Gloria Rozek at St. Louis Catholic Church in Fond du Lac, WI. Together they raised their family on the farm. He believed in service to others. Fergie served on the Lomira School Board, served as a trustee and council member for St. John’s Catholic Church. He dedicated 40 years to serving the town of Byron, first as a supervisor and later as town chairman. He was voted citizen of the year in 2013. In addition he was a member of the Byron Historical Society. Fergie enjoyed sports, playing in his early years, watching in his later years. He especially enjoyed baseball, and was a lifelong Cubs fan. He was glad he lived long enough to see them win the World Series. He will be dearly missed by all who knew him.

In addition to his parents, he is preceded in death by his wife, Gloria Ferguson; his son, Jeffrey Ferguson; a sister, Dorothy Cole; and his brother, David Ferguson; other relatives and friends.

A Mass of Christian Burial will be held on Thursday, January 2, 2020 at 2:15 p.m. at Sons of Zebedee St. John Catholic Church, Byron WI. Burial to follow in the parish cemetery.

The family will greet relatives and friends at the church on Thursday from 11:00 a.m. until 2:00 p.m.

The family would like to thank the Brownsville First Responders for all their help and care.

The Myrhum Patten Miller & Kietzer Funeral Homes have been entrusted with Fergie’s arrangements.