December 29, 2019 – West Bend, WI – One of the biggest business stories in 2019, aside from the new Fleet Farm in West Bend, was the September 5 meeting when the West Bend Plan Commission reviewed the redevelopment plan for 1610 W. Washington Street, formerly home to Pizza Hut.

A representative for Dunkin’ Donuts and Baskin Robbins was called before the Plan Commission to answer questions about parking, signage, and traffic.

Redevelopment of 1610 W. Washington Street – 2,160 square foot. Property is zoned B-1. Parking – use existing driveway and 21 standard stalls. Required storm water management. Request added signage on west side of building and east side of building. Majority of building is mountain red brick and accents on walls and a cool grey tower. Orange colored awnings. Part of site plan also remove asphalt on east side of the lot. 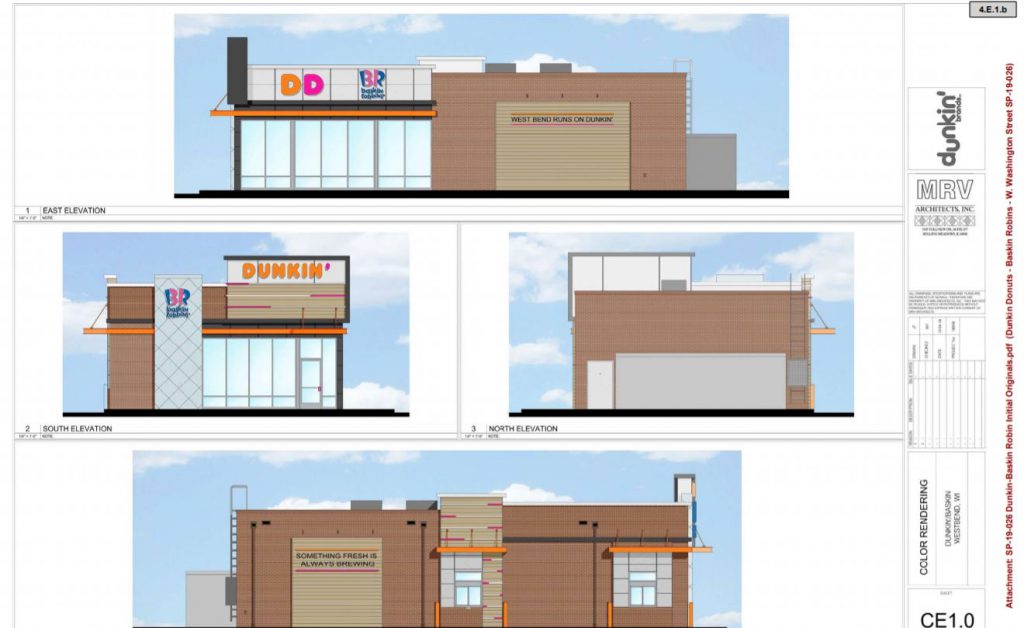 Plan Commission member Jed Dolnick – I have a concern about the traffic flow in and out and driveway is not permittable one way in and one out. Wants to make a left turn onto Washington Street. The type of traffic counts for Washington Street and he doesn’t have an answer. This could be a concern and you can’t get out. Why – unless there isn’t room the drive-up traffic doesn’t get directed straight south. By wrapping it around it conflicts

Is there a monument sign proposed. One on the southwest corner – it’s close to the driveway and possibly over property line.

First step is to have a trip generation study done.

Mario Valentini – MRV Architects. Your analysis is spot on. It benefits us to have a bit of a longer stack exiting after the drive thru. If we have a little longer order you can direct someone to park and then bring the order to them. We keep the traffic flow going by doing that. We need the exit plus the opportunity to go in front of the building and park. If there’s an immediate exit – simultaneously east and west exiting. Mid-block we don’t have a big concern to stack cars if needed.

Mario V. said that is possible. There is some concern about shifting lanes and widening it – we were trying to keep the existing apron in an effort to use what’s there.

Plan Commission member Bernie Newman – asks a question about the third sign on the building.

Mario V. – the Baskin Robbins signs are 20 x 22 square feet. Issue is we have two brands in one building. No way to put them together in one box. It’s a tacky look for both. A co-branded building brings about some issues.

Mario – What you’re seeing with this building is new for Dunkin and new for Baskin. This is a national brand that wants to make some identification so you have the big slogan “America runs on Dunkin” or “West Bend runs on Dunkin.” The other slogan is a catchy phrase – in the past we’ve had situations where the facades become open and blank and the criticism is can you do something to break it up.

We break up the building with materials we see and we are open – if it’s concerning we don’t want too much going on but we do want something.

Sara Fleischman – I agree need to break it up but I won’t support the slogans. I won’t give my vote if slogan stays on the side.

Max M. – add to work with getting the trip generation numbers add that (no slogan sign) as a condition and then determine whether to go forward with a traffic analysis.

Plan Commission member Chris Schmidt – I agree with Sara – not to add slogans on signs of buildings.

Max M. – we can move forward. I don’t have a huge concern in the extent of changes from TIA. We may see an analysis that we don’t need to make any changes. As we move forward with the traffic I can let you know what the study says.

Sara F. – move forward with four conditions and that the slogan on both sides of the building are not allowed.

Jim White – Outlined requirements for developer to meet before development proposal can move forward: erosion control plan, landscape bid, storm water plan, revision of site plan and a trip generation study. Forward all to city engineer and no slog signs on either wall of the building.

Valentini said after the meeting that they hope to open in early spring 2020, however their timetable was weather dependent.

Previous articleJobs, jobs, jobs at Key Logo in Hartford
Next articleVIDEO | Paying it forward at Interfaith Caregivers of Washington County