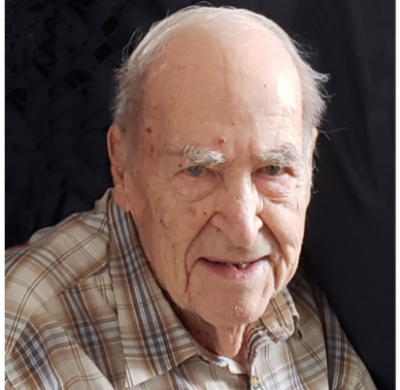 John was born on February 15, 1915 to the late Frederick J and Helen (nee Landt) Roth in Schleisingerville (Slinger), WI. On June 20, 1937 he was united in marriage to Esther L. Fintel. Esther died June 6, 1976, after which he married Louise Schloemer on April 16, 1977. After moving from Chicago, where he lived in his earlier years, at age 10 he worked in his mother’s Campbellsport Grocery Store, delivering groceries in his wagon. He attended Campbellsport High School. During his high school years, he lived with his mom and step-dad, Peter Senn, and helped on their farm near Campbellsport. After high school he became a student at the Milwaukee School of Engineering majoring in electrical engineering. He was employed by Cutler-Hammer for 42 years, retiring in 1978 as Manager, Production Engineering. During WW II, John was involved in the production of electrical controls for the submarines being built in Manitowoc, WI.

John was always very active in his church and a man of strong faith in Jesus Christ. He served in the Methodist Church in West Allis, WI and in West Bend since 1959. He has a long history of service on its countless boards and committees, making him a wealth of knowledge. Those who followed him on those committees would frequently pick his brain! He once said, “A Sunday without church is an empty day without purpose.” When asked his secret to his long life, he would comment, “I have been richly blessed.” He was a wonderful model of how to live life. Besides enjoying times with family and friends, he was a master at fixing things. He loved to build, repair, design, re-purpose almost anything. He was happy to be found in his workroom in the basement, figuring out how to make or fix something from his vast collection of old parts and pieces! A product of the depression years, he saved everything. He will be sorely missed.

A funeral service in remembrance of John will be held on Wednesday, December 18, 2019 at 11:00 a.m. at 5th Avenue United Methodist Church, 323 S. 5th Avenue, West Bend, followed by refreshments at the church. internment at Auburn Cemetery.

Family will greet relatives and friends at the church from 10 a.m. until the time of service.

The Myrhum-Patten Funeral and Cremation Service have been entrusted with John’s arrangements.