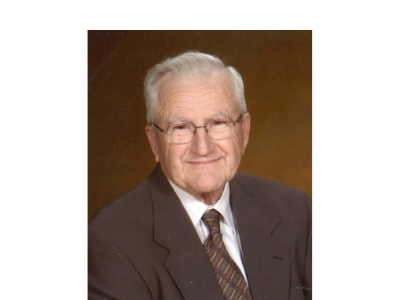 He was born on April 8, 1929 to the late Adolph and Olive (nee Martin) Zuehlke in Lomira WI. He was baptized in May 1929 and then confirmed in April 1943 at St. Luke’s in Knowles, WI. He was united in marriage in August of 1952 to Marjorie Dirks at St. Peter Lutheran Church in Theresa. They had been happily married for 66 years. In 1954 Kermit started the business of Zuehlke TV & Electric and ran the business for 40 years until he retired in 2009. He was a member of St. John’s Lutheran Church and served on the church council for fifteen years. Kermit was also a member of the Historical Society. Kermit loved polka music, dancing, and traveling to numerous places. He was a member of the Lomira Chamber of Commerce for many years and in 1998 was named Citizen of the Year. He will be dearly missed by all who knew him.

In addition to his parents, Kermit was preceded in death by his wife, Marjorie Zuehlke; a son, Steven “Kermy” Zuehlke; a sister, Vernice (Luther) Hutcherson; three brothers, Harvard (Sylvia) Zuehlke, Waldemar Zuehlke, and Leland Zuehlke; and a sister-in-law, Darlene Hankwitz.

A funeral service for Kermit will be held at 11:00 a.m. on Saturday, April 27, 2019, at St. John’s Lutheran Church, 550 Water Street, in Lomira with Rev. Matthew Kiecker officiating. Entombment will follow at Shrine of Rest Mausoleum in Fond du Lac.

Kermit’s family will greet relatives and friends at the church on Saturday from 9:00 a.m. until the time of service.

Memorials to St. John’s Lutheran Church in Lomira or of your choice is appreciated.