Feb. 3, 2019 – West Bend, WI – A story originally posted last October on WashingtonCountyInsider.com regarding a new bakery and cafe opening in West Bend. Here it is again in case you missed it.

Katherine Schenk and her sister Sara Young will be opening Cafe Floriana in one of the retail spots on the lower level of the Cast Iron building, 611 Veterans Avenue.

The space for the cafe is currently under construction. “We’re about 10 – 12 weeks away from completion and we hope to be open in mid-February,” Schenk said.

The sisters do not have any experience in the restaurant industry. “Neither waitressing or hostessing,” said Schenk. “My background is Active-Duty Coast Guard and I was a middle school math and science teacher.”

Young has a background in child development and finance. “I was doing a lot of project management and office management,” she said.

The sisters had often talked about going into business together. “Sara is an awesome home baker,” said Schenk. “That’s why we honed in on opening the cafe.”

Homemade pie is Young’s claim to fame. “Our grandmother baked and our mother had a catering business for a while in Alaska and we helped with that so the baking has always been in the family and it seemed a really good fit,” she said.

“It does go beyond the coffee and pie because we really want to be part of the community and offer a gathering place for the residence and the people in the neighborhood and our focus will be the hospitality aspect and making our customers feel welcome,” Schenk said.

Click for Part 2 of the VIDEO interview with the new owners of Cafe Floriana. 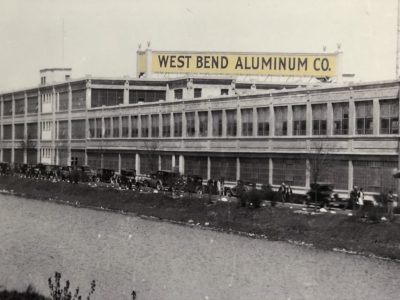 The Cast Iron was once home to the West Bend Aluminum Company and in 2016 owner, Jane Hendricks, completed a major remodel and turned the old factory into high-end apartments featuring 13-foot ceilings with exposed duct work, granite counter tops and stainless steel appliances.

While the studio units and 2-and-3-bedroom apartments rented out Phase II of development started.

The retail began to take off with Tochi Ramen and the Rivershores YMCA next door along with new neighbor Children’s Hospital which moved in January 2018.

West Bend Company was one of the largest employers in the community as entire families would be on the lines manufacturing aluminum cookware or electrical appliances.