June 6, 2019 – West Bend, WI – Historic West Bend Theatre, Inc. (HWBT) has selected Conrad Schmitt Studios, Inc., of New Berlin, along with renowned local artist Chuck Dwyer, as its contractor for replication of the artwork that decorated the original 1929 interior of the “house.”

A historic paint analysis revealed elaborate artwork throughout the movie house. Much of it was stenciled art that covers the pilasters, spaces below eight well-preserved urns, beams and ceiling.

The artwork was painted over sometime during its 90-year history with maroon paint.

Tracings and digital photos of the stencil patterns will guide the artists in replicating the bright and colorful artwork throughout the historic building.

Eileen Grogan of Conrad Schmitt said a process similar to the original stencil process would be used in the restoration.

”All the history is there,” she said. “We are going to restore it by the book.”

Conservator Brian Fick with Evergreene Architectural Arts, was the one who uncovered the five-color stencil pattern on a shield shape with two birds. “It looks a bit Germanic which, in an art-deco context is a little odd but it kind of suits the area,” he said.

Fick uncovered the mural using solvents and gels. A large breathing apparatus is on the floor next to the dusty theatre seats.

“I knew there was something there because I could see a bit of shadow,” he said.

Pointing to the ceiling Fick highlights some of the black lines of another pattern of work.

“This piece will be documented and I’m taking samples,” Fick said. “We take the paint from the plaster it’s painted on all the way through to the top layer. We then cut that so you see the paint layers in cross section and that can give a better, more accurate representation of what the color was.”

“We had not expected to discover that added historical element for the building,” said Nic Novaczyk, HWBT president. “We did not budget for this unforeseen expense, so we are asking our broad base of supporters in the community to help raise this added amount.”

There will be a community event July 18 to help with that ask. 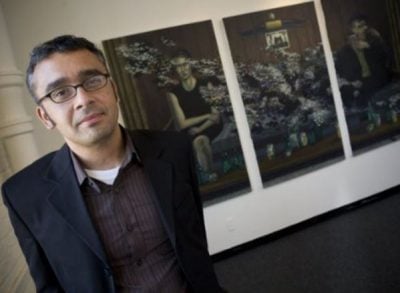 Dwyer is a West Bend native and graduate of West Bend High School. He was Valedictorian from the Milwaukee School of Art and Design (now MIAD) and studied in Europe. His restoration assignments include the Cathedral of Notre Dame and the murals at the Waldorf Astoria Hotel in New York City.

Dwyer said he didn’t much notice the artwork in the theatre when he was a kid at movies. ”I was more worried about whether I could hold the girl’s hand,” he said.  “I’ll do the best job I can. It will be a lot of fun.”

Click HERE to learn more about the helicopter delivery during the restoration of the HDWT.

Click HERE to get a view of the work going on on the roof of the theatre.