On Monday, March 26 the committee will talk about using sharpshooters for deer management. During a five day test program for deer management in West Bend in January 2018, five bow hunters killed a total of three deer. Their goal was 40.

Sharpshooters have been discussed in the past. Some of the concerns were cost and safety. Tom Isaac with the DNR presented some details during a meeting in August 2016.

-Options to control deer include sterilization, sharpshooters, and trapping.

-One of the primary questions according to Sadownikow was, “How do we know if we have a deer problem.”

-DNR said there are a variety of way to determine deer numbers including monitor car vs. deer accidents, count how many plants are eaten, and pellet count or count via aerial survey with a drone video.

-Sadownikow said the ultimate goal is to manage the herd. Another suggested option was to get volunteers to qualify as sharpshooters and maybe close a park for 2-3 days to try and solve the problem.

In 2009 in neighboring Ozaukee County officials in the City of Mequon brought in sharpshooters for $11,000 to help cull the deer herd by 100. According to a report from the Parks Director the sharpshooters used bait, shot the deer from tree stands at night while the park was closed.

Monday’s meeting in the Conference Room at West Bend City Hall is open to the public and begins at 5:30 p.m.

After the meeting some of the neighbors in attendance talked about the huge problem of deer in their yards on Deer Ridge Drive. One suggestion that helped keep deer from destroying plants was Irish Spring soap.

Jan. 17, 2018 – West Bend, WI – Final totals are in for the Deer Management Program at Lac Lawrann Conservancy in West Bend.

Five bow hunters had five days to try to trim the deer population by 40 deer and while hunters saw a lot of deer the final results will surprise you. 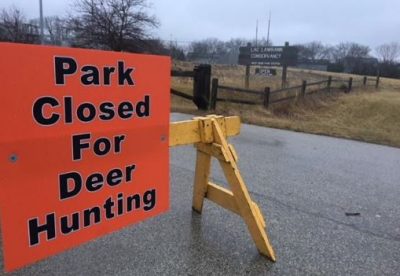