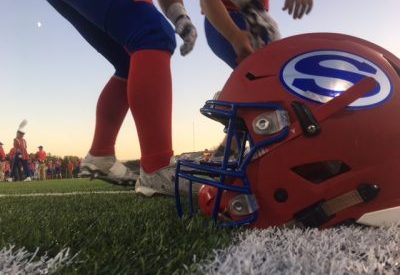 Sept. 7, 2018 – Hartford, WI – Thursday nights football game under the lights in Hartford was an exciting game for the nearly full house at the Gib Mahr Field.

Hartford Orioles hosted the undefeated Slinger Owls. The night was tagged as Coaches versus Cancer game, which has become an annual event for the two neighboring school districts.

The game was held on Thursday evening to accommodate a live broadcast on WVTV, Channel 24 from Milwaukee.

Hartford got on the scoreboard first. With just under 4 minutes the Orioles picked off a pass and  AJ Arndt kicked a 37-yard field goal for a 3 – 0 lead for Hartford.

With 4:55 remaining in the first quarter, Hartford scored again as Jacob Pepin had a 55-yard punt return for six points; the point after touchdown (PAT) was not successful.  Hartford led 9 to 0.

Nineteen seconds into the second quarter, Slinger’s Luke Homberg ran 20 yards for a touchdown, the wet field helped nullify another PAT. The Owls were on the board but trailed 9-6.

With the Orioles in possession, Slingers Anthony Romens recovered a fumble which was followed by Jeraed Lighthizer scrambling in for a touchdown from the 5-yard line. The PAT by Trevor Ulesich was good giving Slinger the only lead they would have in the game at 13 – 9.

Three minutes later in the second quarter, Scott Savage of Hartford ran into the end zone for a touchdown with a successful PAT from AJ Arndt and the Orioles were again in the lead 16 – 13.

With 12.9 seconds remaining in the first half Jason Patterson took a 4-yard pass in for the final touchdown of the game, the PAT was good.

Slinger was victim to 5 turnovers throughout the game.  The Owl’s defense was able to step up and stop the Orioles scoring for the remainder of the game.  The Coaches versus Cancer traveling trophy went to Hartford Orioles.

Next week, Slinger will host the West Bend East Suns.  It is also Slinger’s band night with 500 kids performing on the field during the halftime.  In addition it will be the SHS Band Fish Fry.  Tickets are available from any student-musician or at the Slinger High School Office.