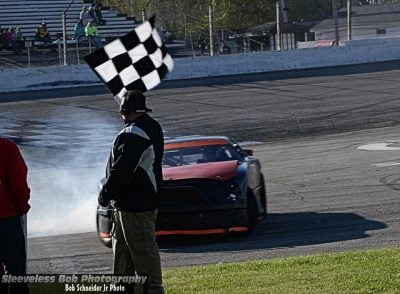 May 7, 2017 – Slinger, WI— Taking advantage of a brake issue by early race leader Gary LaMonte, Steve Apel stormed to the lead on lap 54 of the 75-lap super late model feature  and never looked back, capturing the victory in the 70th season opener Sunday afternoon at the Slinger Super Speedway.
“I don’t know what happened to LaMonte but we were chasing him down and it could’ve been hard to pass him,” Apel told the crowd from victory lane, “On that last restart it sounded like his motor was popping a little bit but we got the lead and never looked back.”
“Wednesday night we came here (to practice) and had problems,” Apel continued, “And the guys spent all night Thursday, Friday, and Saturday to get the car ready and I can’t thank them enough.”
After LaMonte’s issues dropped him back in the running order, Jeff Holtz and Alex Prunty battled for the runner-up spot with Holtz edging Prunty for the position at the checkered flag.
“I needed that yellow flag near the end there so I could get it back under control, “Holtz stated after his second place finish, “I was just about getting ready to spin it out there about halfway through but I’m glad the car’s home in one piece and I’ll take second place.”
“We had a tight car and after that last restart there was a little front contact,” Alex Prunty said describing his battle with Holtz and finishing third, “But we got third place with a car that was less than spectacular from what I’m used to and we’ll get it back together this week and when we come back we’ll be good.”
Ryan DeStefano battled all day and finished a respectable fourth while Fred Winn scored his first top five in nearly four years. Rob Braun and Grant Griesbach finished sixth and seventh respectively while Gary LaMonte’s late race brake issues dropped him to eighth after pacing the first 53 laps of the event. Rich Loch and Nick Wagner rounded out the top 10 finishers.
The event was slowed twice by caution flags, both for minor incidents, and early contenders Brad Mueller, Chris Blawat, and Conrad Morgan all retired with mechanical issues before the event was concluded.
Jerry Eckhardt broke his own record for being the oldest event winner at Slinger by capturing the super late model semi-feature over Brad Keith and Jake Vanoskey. Tim Lampmann finished fourth and David McCardle was fifth. Brad Keith, Ryan DeStefano, and Steve Apel each won a super late model heat race and Conrad Morgan returned from injuries suffered last year in grand style by turning in the fastest lap in qualifying at 11.212 seconds.
R.J. Braun drove to his first career late model feature victory by holding off Jake Hassler and E.J. Waldron in the 40-lap event..
Waldron paced the first 30 laps of the race while Hassler and Braun followed in his tracks. As the leaders caught lapped traffic, Hassler made his move first, claiming the top spot for a lap before Braun was able to race his way by and into the lead on the following circuit. A caution flag for a spin on lap 32 tightened up the field for the final eight laps and Braun was on his game as the racing resumed and he held off Hassler and Waldron for the victory. Ryan Gutknecht finished fourth and Kyle Chwala was fifth.
Shaun Scheel won the late model semi-feature over Chris Ratajczyk and Tyler Hromadka while Ryan Lovald and Kevin Bush rounded out the top five. Late model heat races were won by Shaun Scheel and E.J. Waldron while R.J. Braun was the fastest qualifier with a lap of 12.178 seconds.
Ryan Gutknecht held off Eric Lingford to win the 35-lap sportsman feature which combined cars from both the Midwest Sportsman and Area Sportsman divisions. Jimmie Evans finished third ahead of Scott Dunning and Paul Wagner who were fourth and fifth respectively. Jimmie Evans won the sportsman heat race and Eric Lingford took fast time honors after circling the speedway in 12.720 seconds.
Scott Hoeft edged Nick Schmidt to win the debut feature for the brand new Super Beez division at the Slinger Speedway. George Sparkman took the checkered flag in third while Brandon DeLacy and Jayden Buckley rounded out the top five. Nick Schmidt won the Super Beez heat race and Tom Berens was the fastest qualifier with a lap of 13.555 seconds.
Paul Reagles won the Slinger Bees feature event over Anthony Dorzok and Tom Elsinger Jr. Matt Urban finished fourth and Jonah Frederickson was fifth. Jonah Frederickson and Tom Elsinger Jr. also each won a Slinger Bees heat race and Paul Reagles took top honors in qualifying with a lap of 15.510 seconds.
Brian Baldyga won the American Super Cup feature over Tony Rendina and Amanda Bohn. Chris Deren and Jessica Talley rounded out the top five finishers. Amanda Bohn and Tony Rendina each won an American Super Cup heat race and Brian Baldyga was the fastest qualifier at 15.230 seconds.
Rick Bruskiewicz closed the afternoon with a thrilling last lap victory in the Figure 8 event.