Home  »  Thecla Richter • Veteran • Washington County • West Bend   »   The history of Thecla Richter – life of a West Bend nurse during WWI. “Hear the humming of the engines of the German aeroplanes and the whiz of the bombs..” 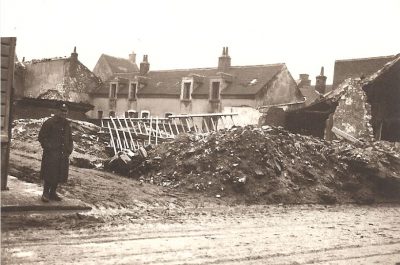 ……  I never realized how much I cared about coffee until I got to a place where we could not obtain it.  Even in Paris we were not able to obtain a good coffee and I certainly regretted the fact that I did not take my little stove, Sterno heat and coffee with me.

Paris had its first air raid while we were there on our leave. I never heard anything more weird than the warning sound of the siren.  After only a few moments and we could hear the humming of the engines of the German aeroplanes and the whiz of the bombs before they exploded.  It was not my first experience so I really was not panicky although I would be quite pleased if it were the last raid I would have to witness.  I viewed the skies from a balcony and it sure was a spectacular sight….  A beautiful moonlight night, skies were dotted with star shells used for lighting purposes.  We could also see the planes because some of them were lighted.  I think the ones we could see were French planes that carried lights in the wings.

Much damage was done and quite a number of people were injured and killed.  One plane was brought down only a few blocks from where we were staying.

At the present time we have only about 800 patients but we will be getting large convoys of wounded very soon if the nice weather continues.  Each year all people look forward to the big spring drives to have all important work accomplished and of course that will mean many casualties.  I dread to think of all the splendid young men coming over from the United States to face hardship unheard of before this frightful war but I suppose that they will withstand the strain as well as the Tommys and Colonials.

Met quite a few friends and acquaintances while in Paris. It really seems strange to be meeting people you know way over here.

I received a great many splendid Kodak pictures from Hank Regner-a splendid Christmas box from him.

I am on night duty at the present time.  This is the first night duty I have had since coming over……. 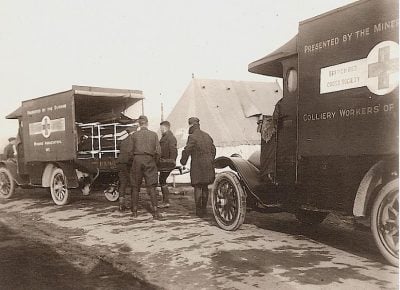 Just admitted a convoy of patients.  Have been receiving patients almost daily for the past week.  One notices the difference at once.  As soon as the nice weather comes along we have more patients admitted.

I have been working in the wards actually caring for the patients since I returned from my leave.  I do enjoy the work so much more than I did doing office work and certainly am feeling better than I ever did.  I certainly am getting fat.  I know that I have gained several pounds this last week.  Please don’t worry one bit about me.  Of course we do go out and buy food from the peasants…. eggs and bread are the most important items.

…. I am sure that the French people will have more money after this war than they ever had before.  Even in the houses around our camp you see new stores every day.  The people turn their kitchens or any available place for a counter into a store and sell something.