More than 120 people from western Washington County gathered at the Hartford Town Hall on Thursday night for an informational meeting about the proposed truck reliever route in Hartford.  The Washington County Board is considering a number of alternate routes to ease the truck traffic on Highway 60. One of the proposed routes goes west on Highway K to Highway U and takes Hwy U into Hartford. 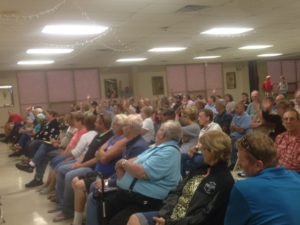 A group of concerned citizens who are trying to preserve rural towns of Hartford and Slinger are the ones behind the effort. The meeting was led by Pam Watkins, a concerned citizen on Arthur Road, and Hartford Town Board chairman Maury Strupp.

Bullet points from the meeting are below:

-Pam Watkins indicated the group needs to come together to determine how to positively convince the Washington County Board to support leaving the truck route on Highway 60.

-Watkins covered the GPS issue.  It follows 83 and the turn on to State Street.  They have now put up truck route signs. If GPS is a problem, why do they think GPS is going to take them out to Hwy K.  It will still bring them the shortest way.

-There was a comment indicating the Hartford mayor said they were going to make all factories use the reliever route.  The early thought is the mayor can request them to take the route, but it does not mean they have to do it. 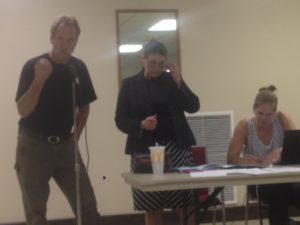 -John Senett spoke to the group. “If 164 happens, traffic comes up from Waukesha avoiding Milwaukee, then having to make the left turn from Jackson.  Pulling the long hill up I41 and merging into traffic up from Hwy K as it is a long pull. Taking it west from Highway K is a dangerous intersection.  Addressed other concerns with safety on the proposed route.  Not to mention the small towns affected, have cheap land, and industrial park.  Now this is Route 11, and there is complaining about Hwy K.  1,000 trucks a day and that is going to destroy my home value.  This only affects us here, but there are people in Wash County that probably haven’t been to St. Lawrence.  We need to let everyone in Washington County know what is going on here.

-Laurie Malchow from St. Lawrence:   Talked about reliever route when first bought property.  It has been an issue for a long time.  If they go head strong with this, it should be on a referendum for the tax payers who are going to foot the bill on our ballot in November.

– Ann Kratz  – 2005 this came up and my husband and I were at the meeting and there were maybe 3 people for that route.  The rest of the county board members said ‘What were you thinking when you placed your industrial park on the West Side of Hartford?’ The 2005 study is written in stone and will come back.  The plan will come back.  We don’t want you going through our rural community.  What goes through Hartford is $2 M, they don’t want to do because City of Hartford doesn’t want to take responsibility.  When all is said and done we are probably talking about $30 M –$40 M.  When talking to Jeff Mueller, take it down 60 and make a left turn lane.  It would affect Mineshaft, that is more important that agriculture or us.  The County Board is stacked and people will be against it.

Strupp –  A referendum is only a suggestion, they can vote against it.

Ricky Kratz – They are trying to divide and conquer and we need to make sure we stay together and keep the city in the city and the country in the country.

Michael Richter – Town of Addison and I would strongly recommend to look at left turns and the timing signals.  Try to do right turns as much as possible as it is quicker and easier.  You can add a lot of traffic.  The timing of the traffic signals can add more traffic.  Use your dashcam video to time the lights to be able to see on west bound 60.  Look at cross traffic.  You can add data based on dash cam just by driving the routes.

Dennis Gehring – I was impressed with Johns remarks being a truck driver.  I think if we could get some of these truck drivers opinions to these County Supervisors, that could be effective.

Strupp – We have a town board meeting next Monday night and we will be adopting a resolution that they cannot use any town of Hartford roads for this.  They could use K as far as it is, and we don’t know what they will try.  That is a State Statute.

Watkins said, “Please take time to thank your town supervisors for backing us.”

The public works meeting is Sept. 28

Why has 167 never been brought up as far as the reliever route? Strupp said, “They indicated it is going to cost 3 times as much.” Strupp indicated he will be at all the meetings and wouldn’t miss any.

“Our position is no reliever route,” said Watkins. “They should stay on Highway 60. We need to all come together.”