Home  »  Uncategorized   »   Truck Outfitters on the move in West Bend 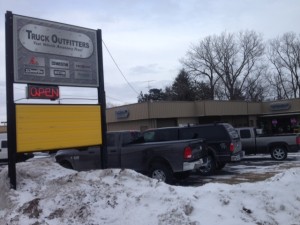 A new shop will be moving into the empty storefront formerly home to Verlo Mattress, 1325 S. Main St. in West Bend, as Truck Outfitters jumps one lot to the north.

Douglas Geracie owns the vehicle accessory store, 1347 S. Main St. He’s been considering the space next door ever since Verlo moved out in December 2015.

“It’s a little bigger than what we have for a showroom and it’s going to put us closer to the road, because right now we’re kinda sitting back a bit,” Geracie said. “We’ll still keep our place next door for storage and installs.”
Geracie hopes to be moved by Feb. 1 but said, “We’ll see how it goes.”
Truck Outfitters has been in business since 1996, it employs six people and is open six days a week. On a history note, prior to Verlo the big glass storefront was home to Juan’s Mexicali restaurant which opened in April 2008 and was owned by partners Steve and Linda Paykel and Tracy and Jeff Ketter. Juan’s was in the former showroom for Consolidated Doors, which moved to the back of the building.