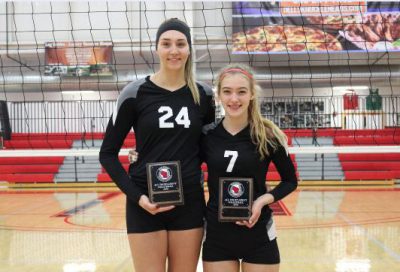 Kayla Boehm and Breanna Cronin were selected by coaches as being the two top players throughout the tournament and selected to a team of six outstanding players.

Boehm connected on 38 kills and 11 blocks for the seven-match tournament.  Her best game was in the semi-final match against Eau Claire at Barron where Boehm had 8 kills and 4 block.

She recorded 43 kills, 12 ace serves and 57 digs for her tournament play.

Cronin’s best match was against UWM at Waukesha where she had 10 kills, 2 ace serves and 7 digs.

The coaches really recognized the outstanding play these two student athletes had for the WCC Tournament.