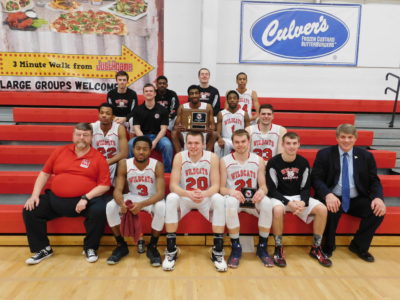 Feb. 27, 2017 – West Bend, WI – The UW-Washington County mens basketball team advanced all the way to the championship game but lost a heart breaker to No. 1 seed UW-Waukesha Cougars on Sunday, 73-68, at Just a Game Fieldhouse in Wisconsin Dells.

Having played the later game in the bracket the day before and giving everything they had to post a huge 79-75 upset victory over WCC Western Division champion UW-Marathon County, the Wildcats returned to play the championship game only 18 hours later against a Cougars team that coasted in its semi-final game on Saturday.

Still, the Wildcats were in such good physical and mental shape that they almost brought home the first WCC championship in school history.

During the championship game the lead changed hands multiple times until the 2015 conference player of the year, UW-Waukesha’s Trent Prater, connected on two consecutive NBA-range 3 pointers as the shot clock was winding down to give the Cougars a 71-65 lead.

UW-Washington’s Aaron Rathke answered with a 3 pointer to cut the lead to 71-68, but the Wildcats rimmed out their last four shots of the game and the Cougars added two points for the final margin.

The Wildcats played most of the championship game without their leading scorer for the season Dre Johnson, who uncharacteristically was in foul trouble all game and eventually fouled out after playing only 18 minutes; he finished with 8 points.

In the semi-final victory on Saturday, Johnson played tremendously leading the Wildcats scoring with 28 points.

The UW -Washington County Wildcats, who were actually picked for a lowly 6th place in the seven team Eastern Division in the Mens Basketball Yearbook pre-season poll, surprised the prognosticators by managing to walk off the court victorious 21 times this season while leaving the court after the championship game having tasted defeat for only the 7th time.

The Wildcats started fast in both games, jumping out to a 10-2 lead against the UW-Marathon Huskies and a 6-2 lead over UW-Waukesha.  In the Saturday game, UW-Washington never trailed, though UW-Marathon did cut the lead to one late in the contest before the Wildcats went on a run to close out the game.

Statistically in the semi-final for the Wildcats Dre Johnson scored 28 with 8 rebounds and his usual nearly foul free game with only one foul.  Evan Rathke hit for 25 points with 5 rebounds, 3 assists, 2 steals, and 2 blocked shots.  Javon Williams had 6 assists, 3 steals, 7 rebounds, and 5 points.  Aaron Rathke scored 11 and added 4 rebounds.  Shaun Fischer had 9 rebounds and 8 points.  Derrick Chaney had 2 points and played well defensively.  Randy Howard also played well defensively but did not score.

Statistically in the championship game, Evan Rathke led the way with 31 points and 5 rebounds.  Dre Johnson scored 8 with 6 rebounds in his limited action due to fouling out.  Shaun Fischer had 11 rebounds 5 points and 2 steals.  Javon Williams had 10 rebounds and 2 steals, Aaron Rathke scored 7 points and added 4 rebounds.  Derrick Chaney had 7 points and 3 rebounds.  Miles Perkins hit both of his shots for 4 points, and Randy Howard was the assist leader with 2 while also scoring 6 points and grabbing 5 rebounds.

One of the major highlights for the UW-Washington County Men’s basketball team was the outstanding positive energy provided by the teammates who were not in the game.  Led by Matt Lane, who eventually totally lost his voice yelling constant support to his teammates, Emmett Williams, Miles Perkins, Rohan Behari, and Sam Krause all deserve tremendous credit and were extremely vital members of the team.  Each of them played well during the season, but the rotations were shortened for the tournament.  Still, these guys continued to work very hard in practice and helped make the team much better for having their presence and positive attitudes.  It is truly players like Lane, Williams, Perkins, Behari, and Krause that comprise the unsung heroes in sports that can make a good team great, and these players clearly played a primary role in the team’s success.

The team would like to thank the many fans who supported them all season both at home and on the road.  Their cheering in the stands continued at the state tournament as they made Just a Game Fieldhouse in Wisconsin Dells feel like a home game because so many Wildcats fans were in attendance.  Their endless support all year definitely energized the team.

Additionally, the team sincerely appreciated the efforts of Athletic Director Debbie Butschick and Athletic Trainer Lori Dauss who played significantly key roles throughout the team’s season and sacrificed much of their own time to benefit the team.

Many thanks and appreciation also go out to the members of our dedicated and talented local media team which was absolutely spectacular the entire season. 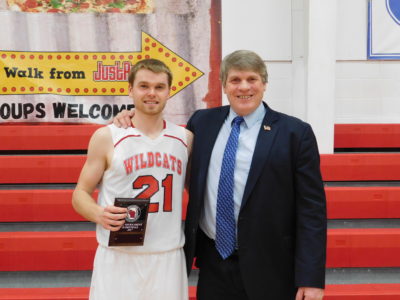 The Wildcats Evan Rathke was selected to the 2017 all-tournament team after scoring 25 points in the semi-final and putting up 31 points in the championship game.


Our entire team took the loss very hard, saddened that we could not bring home the championship we worked so hard for.  Though the team was picked for second to last place in the preseason poll, we never believed it.  Our team firmly thought we could rise to the championship level and win it all, and that was one of our primary goals.  We have great sports fans in the UW-Washington County region that deserve a men’s basketball championship and our team tried our best.  It was with heavy hearts that we returned to campus exhausted and with a runner-up trophy.

For now, the draught continues, but we know that somewhere out there in our area are the future players who are going to break through and win the first men’s basketball championship in school history.  Perhaps, the future champions are even reading about our team and dedicating themselves to attend this excellent University in West Bend – our beautiful campus in the park that we affectionately call the “U”, UW-Washington County.