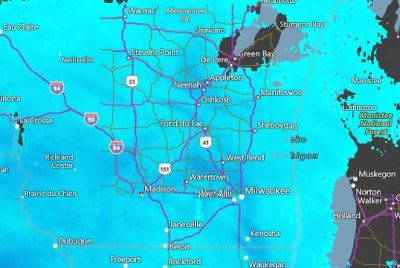 Washington County Sheriff said roads are snow covered as of 10 p.m.  Plows and salters are at the ready.

* TIMING…Expect snow to develop late this evening and then diminish around the middle of the day on Tuesday. The widespread snow will be heaviest late this evening through tonight, with some heavier periods possible with the lake effect snow Monday night into Tuesday.

* SNOW ACCUMULATIONS…Total snow accumulations of 6 to 9 inches are expected with the highest totals in the lake counties. The snow will be dry and powdery inland, but a bit wetter toward the lake.

* IMPACTS…Plan on difficult driving conditions…including during the morning commutes on Monday and Tuesday.

A winter weather advisory for snow means periods of snow will cause primarily travel difficulties. be prepared for snow covered roads and limited visibility…and use caution while driving. The latest road conditions for Wisconsin can be obtained by calling 5 1 1 or by visiting www.511wi.gov.