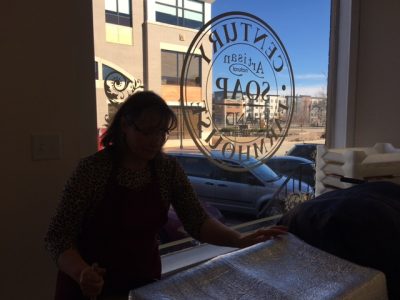 March 12, 2017 – Big Cedar Lake, WI – Looking toward the future also means seeing where we’ve been: the gift of friendship.

In which I meet an old friend and look backward just a little as I look ahead.

The little black-and-white photo with the old-fashioned dated white frame was carefully encased in a plastic sandwich bag and immediately became one of my favorite treasures.

It is a small memento of the past that has touched my heart in many ways, most importantly because it came into my possession as I was dismantling a treasured life of soap making – grasping at memories at the same time as I was looking forward.

With my announced decision to end making and selling soap at Century Farmhouse came streams of well-wishers and saddened customers through the front door at 136 S. Main Street.

Some of them were customers-become-friends, some were shoppers hurrying to try our soaps before we closed, and one in particular was someone I had probably not seen since I was 8 years old and we moved from the city of West Bend to the family farm near Big Cedar Lake.

A hundred-gazillion years ago, before I was born, my parents built the pretty Lannon stone house that still stands at 1616 W. Decorah Road. Ours was the last house on the block, with a hayfield separating it from 18th Avenue.

Lying on the top bunk in the bedroom I shared with two sisters, I could have a clear view of a stream of bobbing lanterns moving around the edge of the gravel pit and hear the Girl Scouts from Camp Silverbrook sing their way along on evening hikes.

If you were to look very closely at the driveway just south of where it meets the front walk, you might see the barely-there imprint of my shoe, bumped into wet concrete as I raced to join my grandfather for a ride in the back of his 1941 black Oldsmobile.

The summer of 1963 saw the widening of our end of Decorah Road from a country lane to a city street and the driveway was being finished to meet it.

Behind our house, towering lilacs created a fence-like hedge between our back yard and the neighbors’ and it was on the back side of the lilac bushes that this photo was taken.

When the gentleman carefully holding the photo handed it to me and introduced himself as Bobby Ludowissi, memories came rushing, and tears nearly came gushing. He had seen we were closing our doors and he wanted to find me to share the photo with me and with my family. The photo is even more precious as it includes the image of my brother who is no longer living. 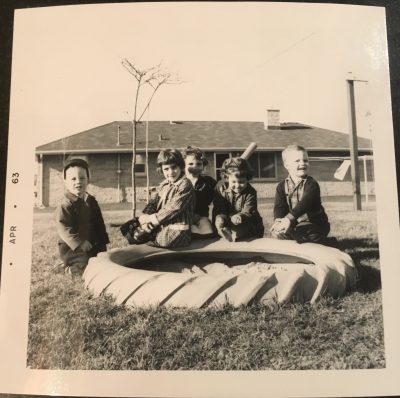 When things around me change in a great way – such as this rearranging of what has been my way of life for more than 15 years – I tend to look back, remember, and treasure the people who have been part of my journey, even as far back as my childhood.

Sentimental? Yes, but  it is good to pull out memories like old photos out of a box – to cherish the experiences and the people who have helped to make me who I am and who I might yet become.

Looking forward is also about looking back. Thank you, Bobby.