At this point, I am predicting the Upriver Lakes season to close later in the week, likely Thursday or Friday.  A detailed report of the number of fish harvested at each station can be viewed through the link:

The largest fish harvested today was 148.3 pounds (77.1”) and registered at Critter’s by Michael Bohow. 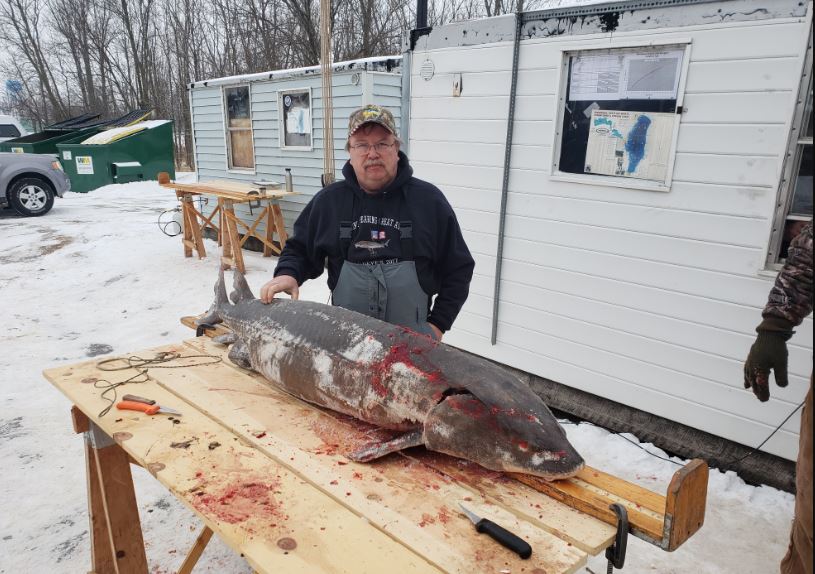 The largest fish harvested from Lake Winnebago was 124.7 pounds (69.1”) and registered at Calumet Harbor by Michael Popp of Fond du Lac (link to photo below). 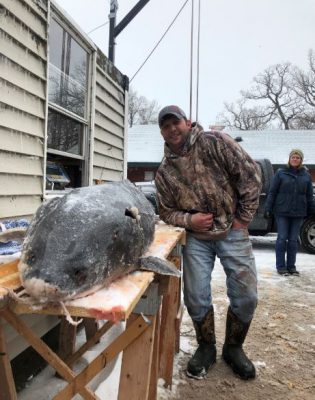 I’m hoping to get a vignette out either later today or tomorrow about the large fish that have been showing up in recent spear harvests and spring spawning stock assessments, so stay tuned! Until then, good luck during the remainder of the season! 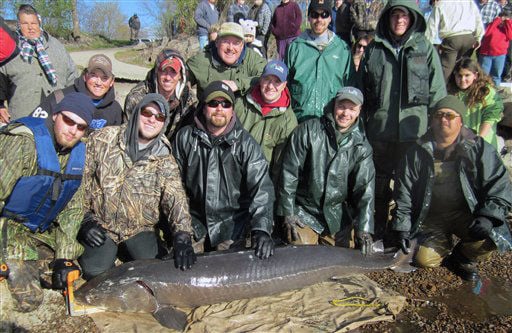 The largest sturgeon so far looks to be the monster above (photo courtesy wiscnews.com) that was tagged by the DNR below the Shawano Dam in April 2012. A portion of the story below is from the Shawano Leader.

Officials found the 7-foot-3-inch long, 240-pound female sturgeon in the Wolf River near Shawano on Tuesday, said DNR sturgeon biologist Ron Bruch. He estimated the fish was born around 1887, when Grover Cleveland was president.

“I knew they were out there and I thought, ‘We finally got one of these massive, nuclear submarine-type sturgeon,'” he said Wednesday.

He said the fish is the largest tagged and released in the Lake Winnebago system since the state started the tagging program, which is aimed at keeping tabs on their population, in 1950s.

At 240 pounds, she’s only 2 pounds heavier than Green Bay Packers linebacker Desmond Bishop. (The fish would have weighed about 30 pounds more, but had recently laid some eggs.) At 87.5 inches long, she’s 3½ inches taller than former Milwaukee Bucks center Andrew Bogut.

The fish, which the state released back into the river after it was tagged, was also the largest ever captured in the state. The previous record — a sturgeon weighing 212.2 pounds and 84.2 inches long — was set in 2010 during the sturgeon spearing season.  Click HERE to read the rest of the story.

Click HERE for Day 1 sturgeon report and the 171-pound sturgeon, the largest so far this spearing season.