The service began with a final salute as all in uniform, police other military, gathered at the front of the church.

Skidmore was recognized for the impact he had on the lives of kids, his dedication to his faith, family and the community. 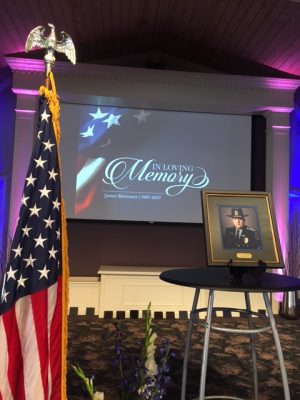 “Chief Skidmore taught us to be strong but not unkind. Treat everyone with respect,” said his daughter Lynn.

While tough as nails in his demeanor, Skidmore’s family recalled he was “good at talking smack” and he “made The Claw famous” – a reference to WWF wrestler Baron von Raschke.

Former West Bend Police Chief Whitey Uelmen said a few words about Skidmore, remembering him for his integrity, moral guidelines and his love of handing out nicknames.

His family recalled how Skidmore “taught us to be strong and always to work hard.“

The West Bend Police Honor Guard presided over the flag-folding ceremony and a gun salute. The local VFW played Taps.