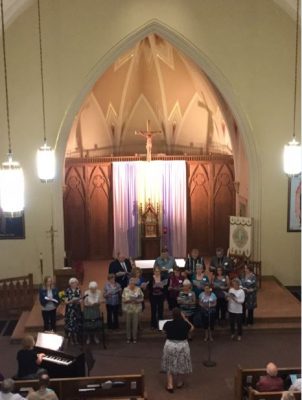 The program for the event noted; It all began in 1955 with the Fifth Avenue United Methodist and Immanuel United Church of Christ choirs.

The late 1980s had St. James Episcopal and St. John’s Lutheran choirs join in the singing.

In more recent years, other churches and local ensembles have joined as well.

Some of the hymns included How Can I keep from Singing by St. John’s Lutheran Church, Days of Elijah by Peace United Church of Christ, One Faith, One Hope, One Lord by the Ecumen, Make Me Humble by St. Mary’s Church and Come, People of the Risen King by St. Frances Cabrini.