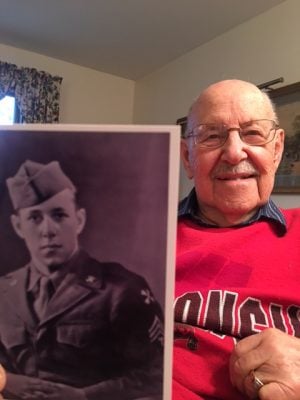 Brandt was drafted at 18 years old; he had just graduated Wauwatosa High School. “They asked me what branch of the service I wanted,” he said. “My dad had been in the Navy and I said ‘Navy’ and the guy stamped it Army.” Brandt pounded the table and laughed at the memory.

Brandt completed basic training at Fort Lewis, southwest of Tacoma, Washington. He then shipped out of Fort Lawton, Seattle for Japan. “I was stationed in Shinagawa, just south of Tokyo by about five railroad stops,” he said.

The year was 1946; WWII was over and it was the Army of Occupation.

Brandt was initially stationed in Tokyo Bay on an island where ships would unload supplies that would go to a warehouse.  “I took my break and went to the typewriter,” he said. “I would just hunt and poke but a sergeant came down and saw me typing and the next day I got an order to report to headquarters.”

Brandt recalled being told to sit down in front of a typewriter. “They gave me a stack of court-martial cases to transcribe,” he said. “You could only have three errors per page and there were duplicate copies and I called the sergeant over and said I can’t do that, I can’t transcribe.”

Brandt said he managed to remain a clerk at headquarters but he was replaced by a Japanese girl who could type.

“It was a good deal because we had good meals and it was like going to work,” he said. “We had three Japanese boys in our barracks that shined our shoes and made our beds.”

In April 1947, Brandt received his notice of separation; he returned to the states and received an honorable discharge. “It was odd because I went in April 24, 1946 and got out on the same day just a year later,” he said.

At 19 years old Brandt picked up a couple part time jobs, went to Marquette University to study marketing and met his wife Audrey.

“I worked two years for Swift and Company, a meat packing company,” he said. “We were selling canned goods, meats and baby food, and we sold to a lot of corner grocery stores.”

Tranferred to the meat department, Brandt quit and went to work for Broan NuTone, now Broan Manufacturing. “I started as assistant office manager and when Broan moved to Hartford I went out there with them,” he said.

Brandt stayed with the company for nearly 39 years.

Eager for the Honor Flight, Brandt said this will be a return trip to D.C. “I’ve seen the Vietnam Memorial but I haven’t been to the WWII Memorial,” he said.

A.J. Brandt, a grandson, will be Brandt’s guardian. “He kind of picked me,” laughed Brandt. “I wasn’t going to do this because I don’t really feel like a veteran. I had a vacation in Japan for a year courtesy of the government. These fellas who went through so much, I didn’t feel it would be right for me to take up a place.”

Brandt talked to a few other vets who had been on the Honor Flight and they convinced him he was worthy enough to go.

Two other Washington-County area veterans on the April 8 flight include Raymond Grund of West Bend and Bill Mayer of Hartford, both served in the Korean War Army.