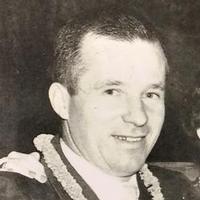 June 28, 2017 – Fredonia, WI – Charles H. Pantle, Jr. of Fredonia died on Friday, June 23, 2017 at his home at the age of 89 years. He was born on May 15, 1928 in Highland Park, IL to the late Charles and Sophie (nee Henrichs) Pantle.  He grew up in the Highland Park area and attended local schools.  At the age of 17, he enlisted in the United States Army, serving during the Korean Conflict.  Following his discharge, he returned to Illinois.

He worked as a mechanic for Dealer’s Redi-Mix for many years. Following his retirement, he held various part-time jobs.

In 1980, the family moved to Wisconsin, settling in Fredonia.

Throughout the years, he enjoyed many hobbies including golfing, bowling and camping with his family.

He was a member of International Union of Operating Engineers Local 150.

In addition to his parents and wife, he was preceded in death by 2 sons Chuck and Lonnie, 3 brothers Alvin, Gilbert (Gloria), William (Carol) and 1 sister Beatrice (Edward) Sjoberg.

A gathering for family and friends will be held at a later date.