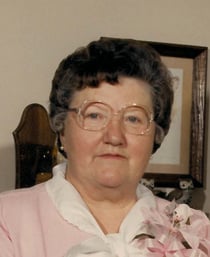 Viola V. Gonnering (nee Anders), age 93, passed away peacefully on Thursday, March 17, 2016 at the Samaritan in West Bend.  She was born on October 16, 1922 in Fond Du Lac, WI to Herman and Theresa (nee Bertram) Anders.  She loved being a part of Holy Angels Catholic Church, quilting, sewing and baking famous “Everlasting Biscuits” which were nicknamed “Never Lasting”.

A special thank you to the amazing staff at the Samaritan.